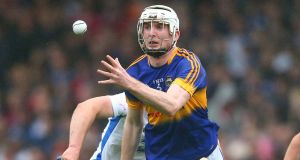 Hurling in Tipperary being eternal, football remains a mere babe in the ashen forest.

Séamus Kennedy is proof enough. A rare dualist who veered towards football until the lure of hurling proved irresistible.

Change came without much warning. Kennedy was a valuable member of Liam Kearns’s football panel until Barry Heffernan’s repeated concussions left a vacancy at right half back, alongside the ferocious Maher men, for the Munster championship opener against Cork last May.

That was the 23-year-old’s senior hurling debut. There he has remained.

Since helping the Tipperary minor footballers to the 2011 All-Ireland, Kennedy had been a footballer first (then again so was Colin O’Riordan now of the Sydney Swans).

In Tipperary hurling is never far away. The 2013 under-21 (football) captain played a phenomenal role in Clonmel Commercials making the All-Ireland club (football) semi-finals this past spring.

“With Commercials Séamus was awesome the whole way through our championship,” explained Michael Quinlivan, when picking up the GAA/GPA Opel footballer of the month award for July. “We played six games outside Tipperary and he was man of the match in five of them.

Anyway, a summer of football for Tipperary, which is remarkably holding pace with hurling, gave way to Michael Ryan’s call. You see Kennedy was always equally gifted at both.

“Yeah, always, Séamus is one of my best friends. The two of us grew up together. He actually rang me when Michael Ryan gave him a call and the two of us went and talked about it. What he said was he didn’t want to be 35 looking back and saying, ‘what if?’

“But, I always had the faith in his ability. He never seemed to get the rub of the green over the last couple of years with the hurlers.

“This year he’s just been rock solid and I’m hoping it keeps going for him this weekend now.”

This Sunday being a repeat of the 2015 All-Ireland semi-final against Galway at Croke Park.

Examples of the Kennedy situation are also evident in Dublin and Cork, but the hurling- over-football option in Tipperary seems like no option at all.

“It was a very, very tough decision for himself and Stevie or any of the rest of them that decided to step away.

“We’re not a bitter group at all. We wish them all the best straight out, and we keep doing that. At the end of the day he’s still playing for Tipperary and that’s the main thing.”

The wonder is how the hurling fraternity would stomach the situation in reverse, as Kennedy did not see a minute of small ball action during the national league.

“No, he was with us (Clonmel) until the middle of February and then obviously they had a run and won the Fitzgibbon with Mary I, so he was with them and I know that Michael Ryan had just told him to be patient and get himself right.

“And it shows the faith that they have in his ability that he was able to break through not having played a game of league hurling and he’s shown how good he was over the last three games.

“Look, when he finished up playing for Tipperary he’ll be back playing for Commercials and I suppose that will be a benefit for me. I suppose I’m one of the only ones that still gets to play with him at football.”