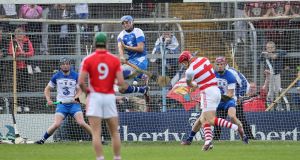 Waterford’s Stephen O’Keeffe was one of two goalkeepers who brought about a change in the rules governing penalties in hurling.

The other was Anthony Nash whose technique of flipping the ball forward and striking it at the far side of the parabola was already causing unease when during the Cork-Waterford championship replay in June 2014 O’Keeffe rushed his opposite number and blocked the strike from close range, sustaining in the process a lurid bruise that starred on social media in the days that followed.

“At the time the adrenalin is going,” he says. “You are not thinking at that level at all. You are just thinking about stopping the ball and I felt at the time that it was the best way to make it happen. I just went from it and things happened from there.”

He dismisses the collateral damage.

“A few days or a week. It wasn’t that bad. It was only a bit of a bruise and it looked a lot worse than it was.”

He is happy with the tightened-up rules that followed his fearless charge – shots to be taken from the 20-metre line one-on-one with the goalkeeper – but believes that the advantage remains firmly with the striker.

“I remember we played Cork and Pat Horgan stepped up in the last minute and he just stuck in the bottom corner. There is no getting to those. You have to weigh up the percentages, is he going to stick it in the corner or put it somewhere where I have a chance of reaching it.”

O’Keeffe made his championship debut for Waterford four years ago and has been a mainstay of the team since. A double All-Ireland medallist with De La Salle College and a Fitzgibbon winner, he picked up his first big intercounty prize last year when Waterford came from Division One B to win the league.

As a goalkeeper O’Keeffe believes that the system depends on familiarity for its effectiveness.

“I suppose you’re left with a lot less one-on-one situations. You feel less exposed. In fairness that’s mainly down to the backs being absolutely touch-tight. They’ve been brilliant so far.

“We’ve got a lot of time to gel together even myself I think Barry Coughlan has been full-back behind me on every team I have played on. There is a huge familiarity there and everyone knows each other’s games. It makes even communicating split-second decisions much easier.”

In the meantime he values the league involvement as the summer tempo begins to beat.

“ Every game you can get now closer to championship, it has a championship feel to it now. It’s a massive benefit to still be in the competition.”

n Stephen O’Keeffe was speaking at the launch in Croke Park of the 17th KN Group GAA Golf Challenge in aid of charity. The challenge invites GAA members to represent their clubs in an all-Ireland tournament. For further information: Liam Daniels at allirelandgaagolf@gmail.com