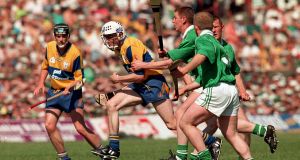 Clare took on Limerick in a classic encounter back in 1996. Photo: Inpho

Monday’s draw for the All-Ireland hurling qualifiers round two produced a pair of fixtures with historical resonance as well as the recent history of having taken place in last year’s championship.

Cork travelled to the south-east 12 months ago and in the end comfortably defeated Wexford but 60 years ago the counties contested one of the most famous All-Ireland finals in history between two counties who had won the previous four titles between them: Cork with three successive wins 1952-54 and Wexford breaking through a year later.

By 1956 Cork had replaced seven of the three-in-a-row team whereas Wexford were at their peak, having won a first All-Ireland since 1910 the previous year. The match had to be postponed by a few weeks because of a polio outbreak in Cork city, which also affected the football final between Galway and Cork.

The teams had attracted a record attendance of 84,856 which still stands. Two years later, the number wasn’t far short at 83,096, the second largest crowd at a hurling final.

“They were powerful, strong men,” recalled Cork centre back Willie John Daly in an interview 40 years later when speaking of Wexford, “very special players. They were also wonderful sportsmen, a pleasure to play against. I’d never have excuses, they were better than us. Once Nicky Rackard scored a second, great goal, it was over. I suppose the save by Art Foley from Ringy’s strike inspired them. Not all of us played up to scratch, though.”

The match was decided in the last 10 minutes. Having led by seven points at one stage, Wexford were hauled back by a Christy Ring-inspired Cork recovery. Ring then put Cork ahead for the first time and a minute later drew the legendary save from Foley.

Nicky Rackard took over with 1-3 in the final eight minutes to claim a famous win for Wexford - which astonishingly remains the county’s last win over Cork in the championship.

Last year Clare and Limerick met in Thurles in a Munster quarter-final and despite Clare looking likely winners in the last few minutes - although they had been the inferior team for most of the match - it was Limerick who re-asserted themselves with a late winning point from John Fitzgibbon.

Twenty years ago Clare as All-Ireland champions took on their neighbours in a blazingly hot Munster semi-final at the Gaelic Grounds before a crowd of 43,534. Having led for most of the afternoon the champions were three points to the good with five minutes to go, including injury-time.

They had wasted a lot of possession and made some mistakes in defence but none of that appeared to matter as the clock ticked down. Yet Limerick equalised not with a goal but three points, two from replacement Barry Foley and another from Gary Kirby.

In the dying moments centre back Ciarán Carey (this season the manager of the Kerry hurlers) moved to centrefield and won possession and broke upfield, rode a couple of challenges and drove over the winning point to conclude an astonishing match.

The great hurling writer Kevin Casman wrote of the dramatic conclusion 20 years ago, drawing in the memory of Limerick hurling greats Mick Mackey, after whom the stand in the Gaelic Grounds was named, and Jackie Power whose statue in Annacotty had been commissioned in 1996:

“Mere fans and enjoyers and chroniclers have the memory of That Point: Mackey has his stand; very shortly, Power shall have his monument; Carey has That Point. The greatest winner ever scored.”