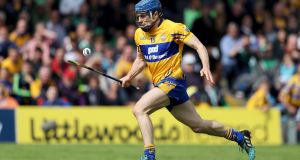 Clare joint hurling manager Gerry O’Connor says Shane O’Donnell will not miss any championship action with the Banner despite taking up the chance to study in America next autumn.

O’Donnell (23) was awarded Harvard University’s Fulbright Scholarship as part of his PhD studies in UCC, but despite initial concerns that the 2013 All-Ireland final hat-trick hero would miss all of next season, O’Connor says he will be back in time for the championship.

“Shane is one of these incredibly talented guys, academically, physically, mentally. But he doesn’t kick off in Boston until September and he’ll be back again in March,” said O’Connor.

“To be fair, he kept us in the loop through the whole process. He was as surprised as anybody but Shane is one of these laid-back guys that just gets on with things like that. He’ll take it all in his stride. He’ll probably come back more refreshed than any player after spending the winter in Boston.

“Cian Dillon went travelling from September to March and he’s in our championship panel. These guys have banked such a level of fitness and conditioning over the past number of years that they actually carry that.

“It’s not like back in my day where you wintered well and you had to get into the gym to get the pounds off. These guys constantly keep their conditioning in check so that there is no real actual fall-back at all. It’s a one-off, six to eight-month period.”

O’Donnell is expected to line out at full-forward for Clare in their Munster championship opener against Cork on May 20th at Páirc Uí Chaoimh, but it looks like Oisín O’Brien will miss an extended period of action of the summer, although Paul Flanagan was due to return to light training this week.

“Oisín O’Brien is the only long-term knee injury guy at the minute. Paul Flanagan and Oisín O’Brien are the only two candidates who won’t make it in terms of getting meaningful training done over the next two or three weeks,” said O’Connor.

“I think it’s too late for them now. Oisín has decided not to rehab the injury. It is a meniscus issue with his ligament.

“He is able to play club hurling but he would require eight weeks of rehab and a scope to actually sort him to train with us. So he’s decided to park that for the foreseeable future and concentrate on the club.

“Paul Flanagan has had an Achilles tendon issue for the last six months. He was incredibly diligent at rehabbing it. Then went back and probably pushed a little hard and pulled a hamstring. He is hoping to do some light training.

“All the other guys have come back that were injured. Peter Duggan, Cathal McInerney, Shane Golden, Conor McGrath – all those guys had niggly injuries but have resumed training now.”