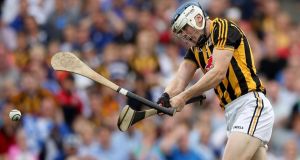 TJ Reid scores his side’s goal despite the presence of a thrown hurley at Croke Park. Photograph: James Crombie/Inpho

I was surprised by people’s reaction coming out of Croke Park. I thought Kilkenny were really good. Others didn’t seem so convinced but in the second half they would have pulled clean away from Waterford only for their best performers – TJ Reid and Richie Hogan – hit some uncharacteristic wides.

Add Ger Aylward’s missed goal chance to that and they should have been out of sight well before they were.

Waterford, as many expected, put up a decent challenge in the middle third of the pitch but they needed this Kilkenny team to reveal some weaknesses. The hunger or desire to reach another All-Ireland final needed to dip.

But there are no chinks in the Kilkenny armour. In those minutes after half-time Cillian Buckley was superb while Michael Fennelly took over at midfield. There was also more scoring support in the forwards for Hogan and Reid, who had done all the first-half damage.

Brian Cody will be very happy with the newer elements of his team.

Joey Holden was another excellent performer, snuffing out the threat of Maurice Shanahan. That’s three of the best full forwards in the game – Joe Canning and Conor McDonald being the others – expertly man-marked this summer.

But it’s their continued drive that boggles the mind. No matter how many All-Ireland medals they have they still want more. What we know as a certainty is this: a Kilkenny hurler will fight tooth and nail for every ball.

Richie Hogan illustrated it best in the first half. After an amazing catch on the 65, he evaded a couple of tackles and put it over the bar but the creation of the score is more important as it was a hook by TJ Reid on Tadhg De Búrca.

Reid had no right to do that. That’s Kilkenny in microcosm; the most dangerous forward in Ireland works harder in defence than most inter-county defenders.

That’s their guiding principle. It shouldn’t surprise us anymore. Nor do we need to investigate the source of all this: it’s coming from Brian Cody. It has always been this way.

Waterford brought the energy levels needed to trouble Kilkenny. Colin Dunford ran hard at them. Austin Gleeson fought like a warrior in the midfield area – they all did – but they were overpowered by Fennelly, Walter Walsh and a collective intensity.

The pressure Kilkenny brought to bear on the opposing half back line and midfield won them the game. It forced Waterford to lorry possession in towards Kilkenny’s goal where Eoin Murphy took a wealth of uncontested ball. It was easy for Kilkenny to deal with, but that’s because of the pressure they exerted out the field. That’s Reid and others’ constant hooks, blocks and tackles.

It looked like Waterford’s distribution out of defence was poor but Kilkenny made them look bad. They should be disappointed with the goal. Two players going for the same ball – De Búrca and Barry Coughlan – in front of their own goal when they outnumbered Reid looked amateurish at this level.

Yet it’s still been a great year for Waterford hurling. Derek McGrath deserves huge credit. They are league champions, they were competitive in the Munster final defeat to Tipperary and again yesterday in an All-Ireland semi-final.

But to get beyond that juncture Kilkenny must be beaten. At least once. Limerick got close last year and Waterford fought manfully this time but they never looked like getting a goal. And without several goals Kilkenny are almost impossible to break. That’s the only way.

Waterford will need to add that to their arsenal if 2016 is to deliver championship honours. But their banners were not torn down by Kilkenny yesterday. They were right in the contest until the last 15 minutes. I just never felt they would win. They got back to three points but Kilkenny misses contributed. A Dunford wide followed by a Gleeson wide allowed Kilkenny get their lead back out to four points and eventually six. Then it was over.

There are a new group of forwards breaking into the team that could make them better again. Patrick Curran and Shane Bennett are young, talented and have serious potential.

But the future is uncertain for everyone. Everyone except Kilkenny. We know what they are about but the brilliance of Richie Hogan and TJ Reid never ceases to amaze me.

After what Galway did to Cork the Leinster final performance deserves to be upgraded. Yesterday it was their use of ball that stood out.

Pádraig Walsh and Paul Murphy were looking up to see their options before just hammering it down field.

I actually think they are better equipped this year than last.