Limerick cruise to second U-21 title in three years 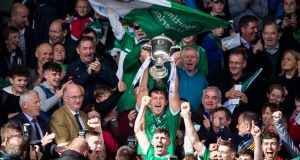 Three years ago the Kilkenny minors secured a four-point win over their Limerick counterparts in the decider but Gillane hit an impressive seven points, as Limerick won their second title in three years in front of 15,485 fans.

Limerick captain Tom Morrissey won the toss and after deciding to play with the strong breeze in the first-half they held a 0-11 to 0-4 lead at the break.

Shane Walsh opened the scoring for Kilkenny inside the first minute but his point wasn’t added to until 19th minute when Billy Ryan raised the white flag.

In that time Limerick fired seven points - Gillane accounted for four of those - but their wide tally continued to mount and they ended the half with eight misses.

But Kilkenny didn’t take advantage of their chance to get back into the game at the start of the second-half and Eddie Brennan’s side faded.

Liam Blanchfield scored their first point of the second-half in the 43rd minute however Peter Casey cancelled that out straight away.

Alan Murphy scored five points from placed balls after coming on early for Kilkenny but it was too little too late and Limerick cruised to their sixth title.