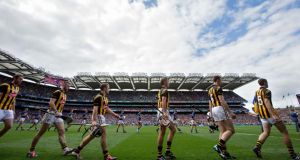 Croke Park was effectively tied to both the three-week gap and the Saturday evening throw-in when scheduling the All-Ireland hurling final replay because of a previous conflict with the women’s football final.

That doesn’t rule out an alternative replay schedule in the future, according to GAA president Liam O’Neill, who was responding to criticism that the three-week gap before Kilkenny and Tipperary meet again – on Saturday, September 27th – was too long. O’Neill also suggested the competing counties may be entitled to extra compensation above the €50,000 granted to counties who replayed both last year, and in 2012 – although he insisted replays were in no way financially motivated.

“I’ve made the point, from day one, that replays are not about money for us,” said O’Neill. “We make out our budget at the start of the year, and anything outside of that is a bonus . . . I certainly think the reduction in ticket prices (from €80 to €50), for the third year in a row, is hugely significant, and unprecedented, I would say, for any sport worldwide.”

Last year’s hurling replay between Clare and Cork (and likewise Kilkenny and Galway, in 2012) was worth an estimated €1.5 million in extra financial income to the GAA: both competing counties were given an additional €50,000 grant towards their holiday fund (above their usual allocation from championship gate receipts) yet that figure, says O’Neill, is not set in stone. Tipperary have already suggested they may need to be better compensated.

“Central Council makes those decisions,” said O’Neill. “We always discuss that, but we don’t speculate on that. No one from either county has said anything official about it. We talked to the counties last year, and the year before, and a figure was agreed. And that will be done again.”

It was the drawn hurling final of 2012 which effectively decided the scheduling of this year’s replay. That game was also played after a three-week gap, but on the Sunday – which at the time clashed with the All-Ireland’s women’s football final. Traditionally, the women’s final was played a Sunday later, although they took the hurling replay date on the agreement they postpone it another week (should that hurling replay date be required).

“It was always hurling final first, then camogie, football, then a two-week gap to women’s football”, explained O’Neill. “But then the women took our spot (for the hurling replay). They had fixed their final for our replay date, and everyone turned to us, and said you’re dreadful, you’re throwing the women out. Straightaway we said we’d solve this, and agreed to give the women that date, and we’d go with our hurling replay on the Saturday evening.

“We couldn’t have played it this Saturday night, because that would clash with our All-Ireland under-21 final. As for Saturday week, the night before the football, I would say for logistical and even security reasons, it would not be possible.”

O’Neill conceded there was bound to be some impact on club fixtures.

Sky Sports customers save on bills; rule changes could change rugby utterly 07:25
Uefa meet to re-evaluate hopes of finishing current season 06:48
Gerry Thornley: Changes to tackle laws could transform rugby by time of next World Cup 07:18
Five newly-released sports books to read over the coming weeks 07:31
Sky Sports customers set to save on bills until Premier League returns 07:31
Crossword Get access to over 6,000 interactive crosswords