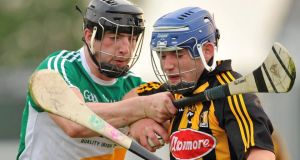 Ger Aylward (right) will be eager to impress for the Kilkenny Under-21s in tonight’s Leinster final against Wexford at Wexford Park. Photograph: Pat Murphy/Sportsfile

Many a wise hurling man was beginning to speak about the end of an empire. Kilkenny would lose to Tipperary in Nowlan Park and a golden era would be no more.

Now, four days on, with Tipperary vanquished, they are back on course to retain their All-Ireland title, with their under-21s stacked with names that look destined to keep the dynasty mighty and savage for some time yet.

Cillian Buckley is perhaps a victim of being shared by both panels of late, and despite being named among the substitutes, is not fit to feature tonight.

Ger Aylward played a thankless role last Saturday night, coming in for a hamstrung TJ Reid after 20 minutes only to be hauled off when Brian Cody turned to Aidan Fogarty on 52 minutes.

No self-respecting sportsman wants that memory to linger so expect some bite from Aylward’s hurley this evening.

Pádraig Walsh, Willie Phelan and Brian Kennedy have also been involved in Cody’s match day squads this summer without being exposed to the senior standard.

But it is the younger brothers of TJ Reid, Richie Power and Tommy Walsh that make this Kilkenny team at least sound formidable. Over to Richie, John and Pádraig to keep the fires burning.

Wexford manager JJ Doyle at least gets first use of his captain Lee Chin, who is weighed down by senior hurling and football commitments as well. Hurling is poised to win out in the short term.

Wexford may have home advantage but Kilkenny’s mid-summer revival looks set to see them retain, and thereby win, a 23rd provincial title.