Kilkenny to take another step on the road to recovery 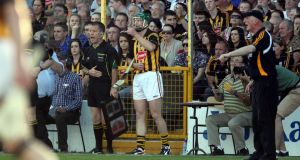 There is abroad in hurling the equivalent of a nervous laugh. Many are convinced Kilkenny will not achieve an All-Ireland three-in-a-row this summer but few are certain who, exactly, is going to show them the door.

Waterford wouldn’t be top of the list of teams likely to do so but this championship has been gloriously out of kilter with widespread opinions and consensus.

There was an element of luck last week in the restorative victory that took the champions through to today. Firstly the fact that it was arch-rivals Tipperary that they drew concentrated the mind wonderfully. Secondly the home draw allowed the venue to become the equivalent of a great revivalist meeting hall, the atmosphere at which rocked everyone in attendance.

The plug
Thirdly Lar Corbett’s injury pulled the plug on whatever – and it was slender – likelihood existed of Tipp finding an energy source in attack. It wasn’t five-star stuff from Kilkenny either but although the margin was small, they never looked in real danger once the second half was properly under way.

Subjected to a daft stratagem of speculative high ball, Kilkenny’s defenders eventually shook off their diffidence to do what they like best: pluck ball out of the air and off their opponents. Equally the forwards found enough form to eke out the necessary scores.

The arrival of Henry Shefflin was probably the most significant aspect of the match and his gradual return to fitness promises to address the leadership deficit in attack. Michael Fennelly’s return looks similarly imminent and the addition of the two of them strengthens Brian Cody’s hand immeasurably.

There will still be vulnerability but there are too many questions about Waterford’s ability to exploit it. Manager Michael Ryan has been dealt a hard hand with the injuries his team have sustained on top of the retirements and long-term absence of Stephen Molumphy. Were none of these an issue, Waterford might have five different selections on the team.

The defence is robust and has experience of top-level competition in All Stars Noel Connors and Michael Walsh. Unless they concede early goals, the backs aren’t likely to be an issue but the loss of experience and quality is felt up front.

Maurice Shanahan looks to be coming into his own and Séamus Prendergast has been a beacon in the central positions but the loss of Pauric O’Mahony and Brian O’Halloran to injury has greatly reduced the attacking options. Waterford will battle hard but it won’t be enough.