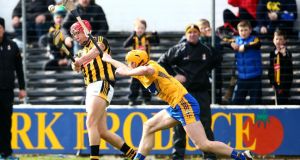 The sense of unreality that surrounded the two most recent All-Ireland champions contesting yesterday’s relegation play-off in Division One A of the Allianz Hurling League was compounded when Clare and Kilkenny served up a vibrant afternoon in Nowlan Park before 7,162.

In the end it was Clare who fell but not before giving their best display of the campaign, a committed and at times combative performance that made life difficult for their opponents at the back and going forward, showcased two terrific individual performances from Tony Kelly and Shane O’Donnell. They also had to cope without Conor McGrath, who never clicked after just about passing a late fitness test, after the 21st minute.

Despite welcoming back a platoon of Ballyhale players as well Richie Hogan and Cillian Buckley, both influential here, Kilkenny never seemed quite to hit top gear but they battled hard against Clare’s sweeper system - Patrick Donnellan and Pat O’Connor sharing duties - and manager Brian Cody got consistent output across the forwards with four of them scoring at least 0-3 from play.

It was however wing back, Buckley who provided the decisive stroke with seconds left, capitalising on a mix-up in the Clare defence and firing over the bar for his second point of the afternoon and the one that prevented extra-time with just seconds left on the clock.

“We weren’t firing on all cylinders,” said manager Brian Cody afterwards, “with regard to the whole game in general but it was a game that took an awful lot of digging in and fighting and sticking with it. There was some brilliant chasing, and hooking and blocking and dispossessing of players, combined with some great scores.

“It was bound to be that kind of game, because the consequences of losing were serious for both counties. Neither county wanted to be in that situation and it showed in the game too because it was a game where a lot of players stood up to be counted. Cillian showed that at the very end when he took on great responsibility to go for the final score.”

His counterpart David Fitzgerald was bitterly disappointed, reflecting on the slimness of the half-time lead, 1-8 to 1-7, assembled by his team after playing with a gusting wind and the penalty missed in the 27th minute by Kelly who struck it wide.

“I’m gutted. I think we were the better team. I really felt coming down here we were going to win. I knew playing against the wind, we’d be okay. It suits out style. We had to go for it (goal) from the penalty. I’d love to say, tap it over the bar but we had to go for it.”

After a couple of weeks during which the county has been involved in controversy in respect of the panel’s disciplinary regime, he added:

“A lot of questions answered to everyone today. We have four All-Irelands won in 130 years; some people forget that in Clare. These lads don’t have to answer to anyone in my view.

“There has been a number of teams that won U-21 and never went on to win senior. I’m so proud my lads have done that. People might have questioned these lads but you could see today how they played for each other. Everyone working for each other - that was massive.”

Compounding the disappointment was a late injury to Kelly, who has pulled either a hamstring or a calf muscle. “I’m not 100 per cent sure,” said Fitzgerald. “I think he has to get a scan tomorrow. We will know more tomorrow.

“He was tearing them apart. I was watching at different times. They had Cillian Buckley on him and they had the loose man actually standing within ten yards off him as well. They paid him a lot of attention but listen, I’m happy with our performance.”

Kelly had orchestrated the first blow, steering a ball into O’Donnell, who would give Paul Murphy an awkward afternoon, starting with this fourth-minute flick and turn, which created space enough for a goal and a 1-2 to 0-2 lead.

Kilkenny came back into the match and ran off 1-3 without reply between the 12th and 19th minutes - the goal a cracking finish by TJ Reid created by a Richie Hogan side-line cut. Clare regained the initiative by the break after a couple of points by David Reidy and a 65 by Kelly sent them in 1-8 to 1-7 ahead.

The second half ebbed and flowed within similarly tight parameters but it was Clare who looked more likely winners, twice opening two-point leads with

O’Donnell and Kelly - five points from play after the break, the 52nd-minute shot from the left wing, brilliant.

But they couldn’t shake the home side. In the last six minutes the lead changed hands twice before O’Donnell equalised. Extra time loomed until Buckley dismissed the prospect.

5 Magic Of Light can take Grand National glory for Harrington