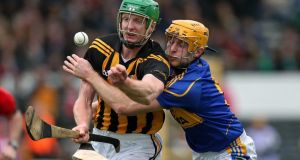 Just your regular dose of hurling between these counties – this one ending with a roar of approval from the Kilkenny supporters that threatened to blow the roof off the New Stand at Nowlan Park. It’s a few weeks since the roof was blown off the Old Stand – and a scoring storm to match that was suitably whipped up here.

Just when it seemed Tipperary might actually blow their opponents away, Kilkenny replied with a 16-point turnaround – Colin Fennelly’s three goals and five points, all from play, ultimately impossible to hold out against.

Something is definitely going on with the climate, too, when what’s served up in late winter is every bit as impressive as high summer. Brian Cody was his usual picture of calmness afterwards, saying hurling is like that now, and “it’s only a league match where at the end of the day everyone carries on hurling win, lose or draw”.

Still, when two teams score 10 goals and 34 points between them it has to be as much about the fear of losing as the aim of winning. Given the still very live rivalry between these teams (as shown here last July) this was a victory for Kilkenny’s minds as much as for their first league points.

“It was a thrilling game for the people who were watching it, at least,” conceded Cody.

“I suppose we did pick things up a fair bit in the second half, and the response was good all day. We switched a few things, and some days you try all sorts of things, and they won’t happen for you. Today, we got the result.”

Before a duly captivated attendance of 8,651, there was no letting up. With the strong wind in their backs for the first half, Tipperary literally stormed in front, and were 10 points up after half an hour – 4-9 to 1-8.

Two of those goals were brilliantly finished by Séamus Callanan, and even though he ended up with 3-6, Callanan too ultimately had to bow to Fennelly’s master class.


Deftly finished
Henry Shefflin’s typically deftly finished goal – finding space where there wasn’t any – brought Kilkenny closer by half time; truth is Kilkenny were doing well to be just six points in arrears.

Tipperary manager Eamon O’Shea agreed, saying afterwards that the 16-point turnaround was partly explained by the “momentum going with the wind”, but that his team certainly played the way he wanted them too.

“I think we’re okay,” said O’Shea. “You’re not happy to get beaten. But I am happy that we are trying to play the game the way we want it. I thought we hurled well, showed good resolve. It showed there a few times when we came back, and they went ahead, and it was nip and tuck.

A few mistakes here and there, maybe, but I wouldn’t take anything away from their attacking play. I think our goals were cracking goals too.”

Some of the things Cody “switched” included replacing Tommy Walsh and Brian Hogan and Paul Murphy’s introduction certainly helped seal up their defence (which left enormous holes in the first half).

Richie Hogan also came off the bench to hit two points in the second half when Kilkenny needed them most.

That’s not saying there was an easy way back into it for Kilkenny. Walter Walsh also showed up for some big points, and Fennelly’s second goal, on 44 minutes, finishing off a thundering run from the middle of the field, had the Kilkenny supporters nicely warmed up, and the score at just 4-10 to 3-11 in Tipp’s favour, a mere two points between the sides.

Not long after that Callanan struck again, the confidence in his own game reflected in his bold ground strike that flew straight through the Kilkenny defence. Callanan soon added another free, too, and again, it seemed Tipperary looked primed to ride out this storm until the end.

No matter what happens for the rest of the season, the attitude Kilkenny showed here in working their way back into a winning position was a good as anything shown in the glorious past. Fennelly was still playing the leading role, and his third goal on 56 minutes – placed in the top left corner – brought the sides level for the first time since the throw-in.


Perfect pitch
Then, the advantage swing back and forth, as first Noel McGrath, then a Shefflin free, maintained the level of excitement at the perfect pitch.

What ultimately prevailed though was Fennelly’s ferocious attacking mentality. On 68 minutes, he again raced into a scoring position, and when Tipperary managed a half clearance, in came Mark Kelly for the killer finish. With that it was clear Tipperary were, finally, beaten.

Just to make sure, Fennelly fired over one of the insurance points, before retiring, just before the end, to the mandatory standing ovation.

“Three-five is a serious score, obviously,” noted Cody. “It’s seldom that happens for anybody. It was a great contribution. But it’s only two league games played. He’s been serious in both games. He has that ability, has that potential, and hopefully he can keep it going.”