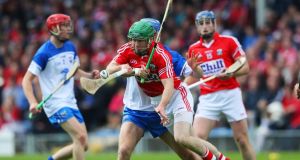 After a humdrum season to date had crystallised in the underwhelming championship display two weeks previously, Cork manager Jimmy Barry-Murphy must have wondered if his team were going to get airborne at all in 2014.

Consequently he was a relieved man in Semple Stadium yesterday after Cork had secured a rematch with their All-Ireland conquerors Clare in next week’s Munster hurling semi-final.

A much-improved contribution from the forwards and a more assertive display all around yielded the sort of result that many had expected going into the drawn match.

“As we said during the week, we were very poor the last day,” he said. A lot of our players were unhappy with their performances. We got a draw and probably might not have deserved it, but our comeback was positive.

“We built on that and showed better attitude all over the field; every one of our players and I thought we showed that today.

“Work rate was the key to it, we didn’t do that the last day. A lot more of our players showed their true form today and I’m delighted with that.

“We made a number of changes but from our point of view I thought the players showed a much better attitude. We won much more possession, our use of the ball was better, and our working of the ball out of defence was much better than the last day.”

He scored with his first touch and added a second for good measure.

“Delighted to see him back,” was the reaction of his manager. “He’s had a horrendous time, a number of operations. I’m just thrilled for him. Our physio Declan O’Sullivan has done a huge amount of work with him, and it was a great boost for everybody to see him back on the pitch.”

The player himself was asked about the reaction of the crowd to his return. “Yeah, it was great. Not something I’d expected, to be honest. Going back to last year, I’ve got a lot of support off the fans and everyone associated with the team. I’m delighted, and I just want to say thanks to them for the support.”

He said that a club match for Cloyne last week had convinced him that he was ready.

“I think that was massive for me, to be honest. Up until two weeks ago I’d only played two half-hours of challenge games. We all know the difference between challenge and championship. We’d a hard 20-25 minutes against Valley Rovers before it opened up but it certainly gave me the confidence to take a few belts or bangs, then waking up the following morning and knowing I was okay.”

Waterford manager Derek McGrath was crestfallen by the decisiveness of the outcome and tried to identify the turning point. He mentioned that he had been struck by the opposition’s demeanour in the warm-up

“I just knew by the Cork body language today that we were going to meet a fairly irresistible force. The disappointing thing is knowing that that was coming and still we weren’t able to counter it, and that’s disappointing from a management point of view.

“When Cork got the lead it was so free flowing initially, the first 10 or 12 minutes some of our fellas lost their shape in terms of ‘I want a bit of this, this is free flowing. This is kind of handy’ instead of maybe – not that we are overly-negative – keeping our shape as tight and disciplined as we were. It was a case of us following the ball up the field and therefore we were opening gaps up at the back”.

Asked had the defeat nullified the positives from the drawn match, he wasn’t sure.

“I’m very disappointed because I thought everything was right in the build-up, so I’m struggling to comprehend where we are, and that’s being starkly honest.

“I think we’re a team that when a team gets a lead on us our belief drops a bit and you can see that playing itself out. That comes from combining young and old. We’re a team that needed a championship victory for confidence as much as anything else – management as well as players.”