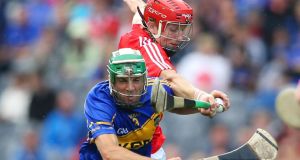 Tipperary and Cork brought their famous local rivalry to Croke Park yesterday and drew a record attendance of 68,728. To the surprise of many neutrals – and you’d imagine the deeper trauma of the big Cork following – this All-Ireland hurling semi-final turned out not to be an epic but a demolition.

For four years Tipp have conspicuously failed to live up to the expectations fostered by the grandeur of their 2010 All-Ireland victory and while they were flailing in decline Cork were building a steadily improving challenge. They came close to winning last year’s MacCarthy Cup and were considered a front runner for this year’s competition.

Instead the universe realigned and Tipp delivered as powerful a display as they’ve given in the past four seasons. Correspondingly Cork were inexplicably – how can you put this? – useless.

Maybe winning the provincial title for the first time in eight years pushed them into an uncharted territory as regards the five-week gap between yesterday and their previous match? But that’s too inadequate an explanation for what befell them.

It does however add to an unfortunate sequence for Munster champions, who have now managed just a single win in the last five years’ All-Ireland semi-finals.

Tipperary were moving with ominous purpose from the very start. Cork could take heart from their own opening when Alan Cadogan fired over a point after around 30 seconds but soon the pressure mounted and the first signs of trouble came in the sixth minute.

Séamus Callanan looked to have fluffed a goal chance when he fired the ball across the square to no-one in particular.

But instead of clearing Cork turned over the possession again, an error compounded when Shane O’Neill missed a straightforward interception and the ball fell to Callanan, who speared the ball into the net for a 1-0 to 0-1 lead.

Tipp led for all of the remaining 64 minutes.

There were two important aspects to this: Callanan as a player has been a special project for manager Eamon O’Shea and gradually his confidence has been rebuilt. He goes into the All-Ireland final with 7-38 scored and almost certain to be the championship’s top scorer after an assassin’s display yesterday and a return of 2-4 – 2-3 from play and the pointed free the only dead-ball score Tipp needed all afternoon.

Secondly the scale of Cork’s meltdown was already becoming apparent. Their touch was nervy and let them down badly. Examples abounded: balls dropped, pick-ups fluffed and scoring attempts lacking all conviction dropping on either side of the posts.

Cork got to half-time a flattering two points behind, 0-8 to 1-7, but, rather than raise the game in the second half, the Munster champions were unable to improve.

All around the field evidence of Cork falling short of their standards this year was exacerbated by Tipperary getting great individual displays out of players. John O’Dwyer has had a fine year to date and yesterday he scored six points from play.

The third was dispatched in the 30th minute after he had closed down 20 metres on Damien Cahalane and blocked his clearance before shooting over a point.

Tipperary were dominating everywhere. There was the unusual sight of Cork being outwitted on the puck-outs – Darren Gleeson in the Tipp goal picking his shots and Cork in disarray trying to shut down the receivers.

At centrefield Daniel Kearney’s work rate was taking place quite deep in his own defence, leaving Aidan Walsh at times isolated and outnumbered and the Cork pairing, formidable in Munster, was overwhelmed by Tipperary for whom Shane McGrath turned back the clock to deliver an excellent display with good support from James Woodlock. Both players hit three points from play.

The only thing steadying the Cork ship was Anthony Nash emerging from goal to shoot a couple of frees from distance. It was needed, as Patrick Horgan – usually so reliable – began to misfire. Uncharacteristically he would miss three scoreable awards and a couple from play.

Cork needed to start the second half well. Instead they went 11 minutes without scoring and and conceded three points. By the 47th minute Tipperary led 1-10 to 0-9 when all hope of a contest collapsed. Patrick Maher, whose industry exerted constant pressure, emerged from a ruck with the ball and flipped it to Callanan who fired home his second goal.

The ceiling duly fell in. Points rattled over like bullets but even with the strain of competing lifted Cork couldn’t find their rhythm. As late as the 58th minute Conor Lehane, who shot four points, still managed to drop a pass.

It wasn’t all perfection for Tipperary. Noel McGrath was fitful and Lar Corbett had a frustrating afternoon, failing to pick the ball for what would have been a clear goal chance early on. But O’Shea won’t mind having something to work on in the coming weeks.