German by name but Dubs star Schutte is Kilkenny by nature 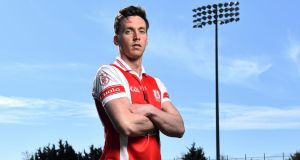 Either way, the Dublin forward is now one of the fastest and most dynamic hurlers in the game.

Schutte was man-of-the- match as Dublin breezed past Limerick to set up Sunday’s Allianz Hurling League semi-final against Cork and, at age 23, there’s a real sense he’s only getting going.

Indeed, he never got going last summer, dislocating his shoulder in the opening minutes of Dublin’s win over Wexford and that’s all part of his motivation for a big 2015.

“It was frustrating and a long winter thinking about what could have been,” said Schutte. “But that motivated me, and with a new manager too (in Ger Cunningham), to get the best out of myself this year.”

Schutte also inherited some football talent from somewhere, as he was also on the Dublin senior panel in 2011 and won an All-Ireland under-21 football title in 2012. But hurling was always his first choice, even growing up beside the minor hurling stronghold of Dalkey and playing for Cuala.

“I’m from Killiney, just down the road from the lad that got the house taken off him,” says Schutte, with utter politeness. “But there are a lot of good hurling people out that direction now, and lads whose parents who have played for the club like myself, Cian O’Callaghan and David Treacy.

“All our dads won championships with Cuala. The numbers that are there now, there’s nearly 2,000 members in the club and it’s down to the people who put in the work over the last 20 years.”

Although his name is German, he points at the Kilkenny side of the family as the likely source of his hurling talent. “Schutte’s a German name, yeah. My grandad was born in Germany, he moved over to Ireland when he was four or five. He’s been here ever since.”

On his mother’s side, he is a cousin of Kilkenny stars past and present Brian Hogan and Joey Holden.

“I made the decision myself at the end of 2012 to just go with the hurling. I come from more of a hurling club, my family have all been hurlers. Probably the main thing to do in Dublin is go with the football over the last few years but I suppose my brother (Paul) also being on the hurling team was a huge influencing factor on me as well. If I was splitting myself between hurling and football, I don’t think I’d be maximising my potential.

“But I played with a lot of lads who won the 2013 All-Ireland in football, so I probably have up-close experience of the way they train and work and apply themselves to the football, and it is something I have taken to the hurling and tried to bring to my game in hurling.”

He also credits Anthony Daly for raising Dublin’s hurling bar to the same height as football, and has no doubt Cunningham is doing the same: “If you look at where Dublin hurling was before Anthony took charge to where he left it, it is just testament to the man and what he did. He brought a lot of the current players on to where they are today and I suppose he brought a Leinster title and a National League. We fell short of winning the All-Ireland but from where Dublin was before to win those trophies is very successful.

“That’s why we’ve got so competitive now because everyone is pushing for that place.”