Galway to contact Munster after unanimous backing for hurlers’ change 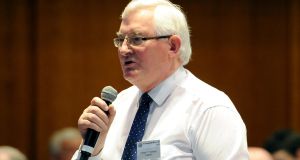 Galway GAA officials will contact Munster after Christmas to establish the appetite there for the county to move their senior hurling team into their provincial championship.

This will increase the pressure on Leinster counties to allow Galway minor and under-21 teams in their provincial championship after a motion calling for change was unanimously approved by Galway on Monday.

A 96 per cent turnout of delegates from the 80 clubs – there was also a tight vote for chairman, with Pat Kearney defeating Kevin Clancy by 127 votes to 126 – gave their full backing to a motion from the Liam Mellows demanding parity for all Galway teams.

Galway will now take a motion to the GAA Annual Congress in February looking for all Galway adult and underage hurling teams to compete in the same province.

The motion also includes a section empowering GAA chiefs in Galway to approach Munster with a view towards moving there if all teams are not allowed into Leinster.

Outgoing Galway chairman Noel Treacy said they would contact Munster in the new year, but he does not think that this unanimously backed motion signals the end of Galway’s participation in Leinster.

“I wouldn’t say that. Basically Leinster are positive people. We have enjoyed our sojourn there with adult teams. They did accommodate an intermediate two years ago, we have a good relationship with them.

“As far as I’m concerned, with the leadership of Uachtaráin Aogán Ó Fearghaíl, with the commitment of Páraic Duffy, with the quality of officers in Leinster and with the wisdom of the hurling people around Ireland, I am confident that the right result will be available in the medium future.

“We do not want this bit-type of situation where we have teams outside of the province, and adult teams inside the province,” he said.

Treacy said he didn’t have a preference for which province Galway plays in but was just anxious to find a solution to an issue which he feels discriminates against underage teams from the county.

Discussions will now take place with Leinster and Croke Park officials to discuss the impact of the motion, while Galway chiefs will contact their Munster officials after Christmas.

“We haven’t spoken to Munster yet. We have no mandate to do that until now, that would be totally unfair to those proposing the motion and to the current status that prevails.

“We will certainly communicate in writing with Munster in the new year and see where we go from there,” added Treacy.