GAA Statistics: Numbers suggest Tony Kelly is the man to watch in Munster 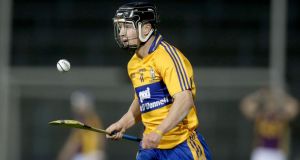 Tony Kelly: his 1-14 from play accounts for 18 per cent of Clare’s total in the league this season. Photograph: Inpho.

Clare and Limerick renew rivalries this weekend in a fitting introduction to the 2015 Munster championship, and if the league is anything to go by Tony Kelly comes into proceedings as the province’s most dangerous and arguably most rounded player.

The 2013 Hurler and Young Hurler of the Year has scored 1-24 for Clare so far this year but it’s his contribution from play which has set him apart from the province’s fellow sharpshooters.

Having played eight league games Cork’s Conor Lehane actually tops the general play scoring charts after helping himself to an impressive total of 2-23, some 14 per cent of Cork’s total.

Kelly, though, has amassed 1-14 from play in the four games he has been available. That’s 18 per cent of Clare’s total in the league, whereas Limerick’s top scorer from play, midfielder Paul Browne, has managed just 0-11 in six games. Kelly’s points-per-game average is also marginally higher than Lehane’s, rounding down to four points a game .

The game’s not all about scoring of course, but Kelly’s tallies would suggest he’s in even better form than during the 2013 championship. That year, at just 19, he helped Clare to the Liam MacCarthy with 0-22 in eight games, all but one of which came from play. In all, he contributed 10 per cent of the team’s total championship aggregate, and an average tally of 0-3 per game, four points less than this year’s average.

Of course league and championship are two very different battlegrounds but Kelly has been leading a Clare team who have struggled this year, with just two wins to their name over the Waterford Crystal Cup and League campaigns. 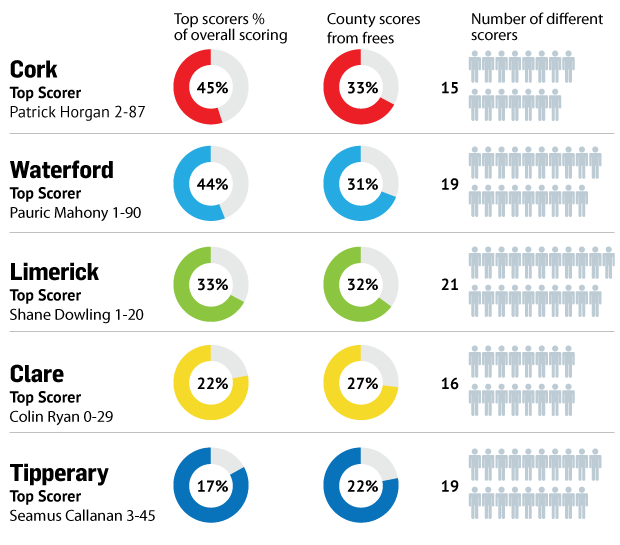 Clare have amassed 27 per cent of their scores from frees and will come up against a Limerick team who have conceded an average of just 0-6 a game from placed balls. If that trend continues in Thurles, the likelihood is they will rely on scores from play to prevail – with goals proving crucial.

Clare, though, have managed just six this year, three coming from Shane O’Donnell. Last year they scored 20 goals in 10 league and Championship games, with their league average of two per game being replicated in the summer. In 2013 they averaged less than a goal a game in the league, and then – barring the All-Ireland final replay when they netted five – they averaged just one goal per game in the championship.

Limerick had an average league campaign, finishing second in Division 1B, and somehow managing to score exactly the same total as they conceded (7-117).

Like Clare they have found white and green flags particularly hard to come by, Davy Fitzgerald’s team average 0-22 per game in comparison to 0-26 from Waterford and Cork.

To put a further dampener on the Clare form guide they have trailed at half-time in four of their six games, yet their substitutes have amassed just 0-5 between them in all games. In contrast, Waterford’s bench scored 5-19 in their eight league games.

Cork’s Pat Horgan is the overall top scorer coming into this season’s Munster championship, his 2-87 accounting for 45 per cent of Cork’s scores. Along with Lehane the duo have contributed almost 60 per cent of their team’s total.

The absence of Pauric Mahony from Waterford’s ranks is bound to be keenly felt when you consider he notched 44 per cent of his team’s scores in the league.

Limerick, though, can call upon scorers from across the field, 21 different players have scored for them and their midfield and defence have accounted for 18 per cent of their scores, more than double the percentage of Cork. Clare are similar in that regard with 15 per cent of their scores coming from midfielder Colm Galvin, yet he and his 0-6 will be watching from the US this weekend. Only adding to the pressure on their number 11 to deliver.