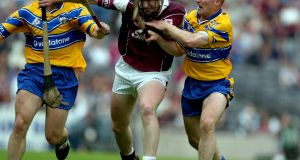 Liam Hodgins of Galway and Jamsie O’Connor of Clare tussle during the All-Ireland quarter-final in 2002. Photograph: Billy Stickland/Inpho.

One of the reasons why the recent outbreak of sniping between Ger Loughnane and Galway hurling sounds discordant is that it is a firefight between two hurling counties, which are so linked by history, geography and family ties.

Loughnane, who managed Clare to two All-Irelands with the energy and conviction of a faith healer, has been caught between the bluntness of his contemporary punditry on the one hand and the disappointing spell he had in charge of Galway 10 years ago.

Traditionally relations between the counties have been warmer and more sympathetic, as between them they maintain the reach of the ancient game on the craggy fastness of the west coast.

They are obviously different in that Clare lies within the boundaries of hurling’s pre-eminent province Munster whereas Galway, apart from a brief and unsuccessful 11 years as tenants in the same province – during which their only win came against their neighbours, in 1961 – stood alone until being incorporated into the Leinster championship in 2009.

As Clare so rarely made it out of Munster, the counties had scarce reason to play each other until the reforms of the past 20 seasons opened up the championship. On Sunday in Thurles they meet in an All-Ireland quarter-final for what will be the ninth time in 18 years, throughout the previous 115 years of GAA activity they had met on six occasions.

Both counties made a move in the 1970s: Galway winning an under-21 All-Ireland and a National League title in 1975 and Clare winning successive leagues in 1977 and ’78 with Cork’s three-in-row team of the same years the perennial obstacle to championship advancement.

Noel Lane is a three-time All-Ireland medallist with Galway – scorer of the decisive goals in the 1987 and ’88 finals – and a former manager, who took the county to the 2001 All-Ireland final. He doesn’t think of his hurling childhood as isolated but he knew when things began to change.

“Growing up, hurling was the only pastime we had and we hurled away at our hearts’ content. All-Irelands weren’t at the top of our minds, it was just playing for the love of it. Our idols were from the strongholds – the Tipperary’s, Kilkenny’s and the Cork’s and the Limerick team – and our local idols were the three-in-a-row football team when we were young.

“The fact was that although the Galway footballers had such a great tradition and so much success, they were a different part of the county.

“The first taste of it I got was when we got to an All-Ireland colleges final in 1973 with Our Lady’s College, Gort, and that gave us a sense of the bigger picture and playing for an All-Ireland. We drew and were beaten in the replay by St Peter’s in Wexford.

“Then at the other end you had all the smart fellas like Iggy Clarke and Seán Silke who went to university and won the Fitzgibbon with Maynooth and UCG.”

The Fitzgibbon Cup is another marker. During the 1970s University College Galway (now NUIG) won the competition in 1977 and 1980. In the latter year 16 of the 18 players, who defeated UCC in the final, were from either Galway or Clare.

Before the emergence of the third-level colleges in Limerick, Galway was the natural destination for Clare students. One of them in the 1990s was Clare’s Jamesie O’Connor. He saw the traffic at first hand.

“Clare clubs are, for example, more likely to play Galway clubs in challenge matches than they are Cork or Tipperary clubs. That’s just pure geography. For me personally, the fact that I went to college in Galway, you’d be more familiar with the city and the club scene.

“That can be an individual thing because Brian Lohan and Seánie [McMahon] – both All-Ireland team-mates of O’Connor – went to UL so their natural affinity would be in the other direction. NUIG’s football hinterland is Donegal, Mayo, Roscommon, Sligo and whatever so it’s not like it’s surrounded by hurling counties. Even the teams I played on were heavily populated by Galway and Clare players.”

The late Niall McInerney was an individual example of the ebb and flow. A member of the breakthrough 1980 All-Ireland winning Galway team, he was originally from Sixmilebridge in Clare with whom he first played intercounty hurling before settling in Galway.

“There are family ties as well,” says O’Connor. “My father’s a Galway man and my mother’s a Clare woman. In one sense the fact Galway weren’t playing in Munster and our paths rarely crossed on the intercounty scene meant that there was that goodwill towards the other. You didn’t have the rivalry that for instance Tipperary and Kilkenny currently have or the same poison that we had with Limerick back in the 1990s when there was a real edge.

“When I was growing up I was at the ’87 and ’88 All-Ireland finals supporting Galway even though I was living in Clare at the time. When Clare were beaten you were quite happy to root away for Galway. Time maybe dissipates that a little but I think it was because we were from different provinces and both counties were relatively starved of success for so long.”

Lane hears about this and observes: “Jamesie was a Galway man. The Lohans’ father Gus hurled with Galway as well and I remember Brian Lohan back at that time saying that he had been brought up on a diet of Sylvie Linnane and Noel Lane because of their father so there was that cross pollination as well.”

“Finbarr Gantley (one of the 1970s Galway players, who also played in the winning All-Ireland of 1980) would have won Clare under-21 medals even though he was a Galway man from Beagh – under an assumed name. So there is definitely that history there.”

The lack of a historical rivalry, nourished by bitterness, has preserved the good will over the years. The counties don’t regard each other as mortal enemies and although O’Connor ascribes that to the lack of routine competition down the decades, Lane believes that there was something special about the counties playing each other.

“We didn’t meet in championship back then but we had absolutely fantastic National League games – the greatest league games I ever played in my career. The Galway-Clare games, home or away, were tremendous. They won the league back to back in 1977 and ’78 and at that stage we had the makings of a team, which won the All-Ireland in 1980.

“In the half-back lines you had Joe McDonagh – God be good to him –, Seán Silke and Iggy Clarke and then for Clare [Seán] Stack, [Ger] Loughnane and [Seán] Hehir. They were very similar to us, it was just they couldn’t make the breakthrough in Munster.

“If they did get out and if we were to meet them it would have been the mother of all finals or semi-finals.”

When they eventually did meet in the All-Ireland semi-final of 1995 – symbolically the last year before travel restrictions in the championship were relaxed – Gantley’s son Finbarr jnr said: “There’s a little bit of rivalry down here but at the end of the day it’s all hurling and we’re all the one area and we’re all friends. Whoever wins on Sunday, we’ll all be behind them. That’s what the hurling is all about.”

“And we celebrated their win in ’95 as well despite the fact that they beat us along the way. I think the whole country celebrated it but we as neighbours certainly did.”

O’Connor says that it all stands to reason. “On the border you think of Tubber obviously, Crusheen and as you go along farther, Killanena and back to Scariff, Mountshannon and Whitegate your neighbours across the fields are in Galway. It’s only natural that there’s going to be a certain amount of goodwill.”

Maybe the familiarity brought about by the modern championship structures will change that and breed the edgier sensibilities of other cross-border rivalries. But you’d hope not.