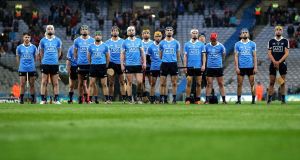 Dublin hurlers go up against Kilkenny this evening in Portlaoise. In ways it’s like the task of Sisyphus, shoving a boulder up the hill and watching it roll all the way back down just as it gets to the summit. That’s not the full story, however. Three years ago Sisyphus got to park the rock and look down on the rest of Leinster, having beaten Kilkenny and won a first provincial title in 71 years.

Galway, modern transplants into Leinster, were the opponents in 2013 but for the best part of 20 seasons Kilkenny have been the benchmark. Under Brian Cody they have lost just nine matches in 17 championships and won 11 All-Irelands and 14 Leinster titles.

During this period they have faced Dublin 10 times during the summer. Set aside 2013 and of those meetings the six-point defeat in the 2009 Leinster final was – by about a light year – the closest the challengers have got. If three years ago is for the moment an exception, it is a warmly cherished one and has at least showed what is possible. Passed milestones Under the management of former Clare All-Ireland winning captain Anthony Daly, Dublin passed a few milestones, most notably winning the 2011 national league with a spectacular win over Kilkenny and then the events of two years later.

Opinions are divided on whether this is a great opportunity for Dublin or likely to conform to the norm but the most obvious next steps for the county would be to win an underage All-Ireland and reach a senior final. These targets would have read like science fiction a brief decade and a half ago. So what changed?

Michael O’Grady – the former Dublin manager and chair of the seminal Hurling Review Group 12 years ago – has passionately made the argument that the hard work at ground level, which had laid the necessary foundations of any sustainable improvement in the competitive profile, was the real touchstone.

Speaking now he says that the rise of the game is noticeable within the county.

“I was in Artane and saw four young lads, late teenagers, heading off with their hurls in their hands and said to myself, ‘isn’t that wonderful’. You wouldn’t have seen that 20 years ago. They were probably heading off to Whitehall or Na Fianna or some club in the vicinity. Then in my own place, Lucan, I saw three girls with hurleys in the hands.

“I’m very happy. They may not have won the All-Ireland but I’d be very happy with the hurling culture in Dublin right now. A lot of people are playing at all levels and you compare it with how backward everything was 30 years ago. It didn’t get equal rights from the county board, which it now gets in fairness to them.”

John Costello is chief executive of the county board and he identifies what he sees as the major influences besides initiatives like the amalgamated Dublin Colleges, which 10 years ago delivered the one All-Ireland to date won by the county, the Croke Cup schools’ All-Ireland as well as the rising profile at underage level.

“One of the reasons has been reform of the games’ programme, which is now played in alternate weeks whereas before we used to maintain more or less separate seasons. Nurseries in clubs are now also dual-code where in the past they were just football. We’d also have a requirement that 95 per cent of our GPO’s are able to coach both hurling and football.

“Another influence is third-level education access. There have been more Dublin players involved in the Fitzgibbon Cup. For many years there weren’t too many Dubs playing at that level so it’s great that they are now getting quality coaching and playing quality opposition.”

The silverware started to accumulate in 2005 with a first Leinster title in 22 years. A first under-21 championship in 35 years followed in 2007 and the county has quickly established itself over that period as the second most successful county at underage in the province, behind Kilkenny. Important indictor The lack of an All-Ireland title in these age groups has been a disappointment but according to the county’s hurling director Colm Burtchaell that type of achievement isn’t the most important indicator of success.

“It is important because it would give a boost to the hurling community in Dublin and also success with underage teams is both a marker and a reward for the efforts put in but you are better off with five decent minor teams than with one brilliant and four poor teams.”

Dublin’s hurlers are penned in by two modern behemoths, the unprecedentedly successful Kilkenny hurlers and the current force that is the county’s own footballers.

Maybe it’s been a misfortune of timing but, under Cody, Kilkenny seniors have racked up All-Irelands at a rate of two every three years and all 17 Leinsters with the exception of three, making the province a highly-demanding environment especially for an emerging county.

This isn’t all bad news according to Burtchaell, who makes the point that underage development takes place in a hothouse environment and is challenged by the high standards.

“I think it’s a positive because we measure ourselves against the best in any age group and I would believe that we’re not too far off. I accept that it’s been hard on the seniors but alternatively look at Munster where there’s no Kilkenny but a range of strong counties. This year’s under-21 championship there for instance is a minefield.”

The impact of Dublin’s footballers – three times All-Ireland winners in the past five years – is perceived to have been the siphoning off of promising talent, lured by what are seen as the greater possibilities of the big ball.

When Dublin reached two All-Ireland minor hurling finals in 2011 and 2012 a number of the stars opted to concentrate on football.

“It is a challenge,” says Burtchaell. “There’s no question that we’ve lost very good players: Cormac Costello, EmmetÓ Conghaile, Ciarán Kilkenny and Con O’Callaghan – they’re the high-profile ones everyone talks about. But it’s not the full story. Someone like Eoghan O’Donnell (the highly rated under-21 defender) was an exceptional minor footballer. Danny Sutcliffe (an All Star) – although he’s not there at the moment – was another in demand with the footballers at one stage. So was Peter Kelly (another All Star).

“The way to go is to minimise the crossover at minor level. Both sides are conscious that they can’t force it and it happens naturally. Players can be 50-50 about the direction they want to take but leaning on them to do one rather than the other is a good way of getting them to do the opposite.

“Anyway it’s a more complex situation. People can say, ‘no dual players’ but the reality of 2011 is that we wouldn’t have even got as far as a Leinster final without those guys and if they’d been excluded or made concentrate on football the rest of those minor teams wouldn’t have had the experience of winning Leinster and playing in All-Ireland finals.”

John Costello, father of Cormac, says that the matter is settling down now with greater dialogue between the minor managers in both games.

“There’s more discussion taking place now and a rule of thumb that a player who is top five in one code and not even top 20 in the other should concentrate on his area of strength. But there’s no forcing young players to choose. I think that would be wrong.”

“That’s tradition. In hurling Kilkenny and Tipperary have huge traditions. We just have to get over that.”

Burtchaell believes that the game, with its playing numbers having doubled in the past 10 years or so, needs to focus on itself and lose the inhibitions.

“We need to look after our own patch and stop looking over the fence the whole time.”