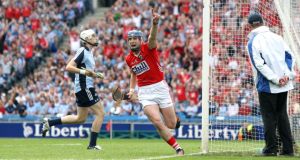 Future generations may look at the bare detail of Cork’s 12th championship win against Dublin in 15 meetings with its ultimately comfortable winning margin and shrug their shoulders but they wouldn’t know the half of it.

A tumultuous All-Ireland semi-final at Croke Park had everything for the biggest crowd of what’s already been an outstanding hurling season: an old-style shoot-out rattling along to the staccato bursts of scoring – 45 in 70 minutes, the highest-scoring of the summer – teams level on 15 occasions, a game-changing sending off, timely goals, missed opportunities and the game at its breathless, breathtaking best.

In the end Dublin couldn’t survive the 66th-minute goal that quadrupled their deficit to 1-19 to 1-23. Gary Maguire took too long to take the ball under control and Patrick Horgan, swift as a viper, flicked out his stick to extract maximum retribution and Cork, with their assassin gene, bounded into a first final in seven years.

It’s a pity that, as both managers accepted, the outcome had hinged on the red card shown to Dublin’s Ryan O’Dwyer in the 50th minute. It must have been a dilemma for Anthony Daly and his selectors when their Tasmanian Devil of a centre forward got a harsh first yellow within the opening two minutes – a decision vehemently protested by the manager.

But O’Dwyer was playing well in a great, swirling match devoid of rancour and it must have seemed worth the chance until in the 50th minute with Dublin a point ahead, 1-16 to 0-18, he caught Lorcán McLoughlin with a frontal shoulder, which ended his involvement on a second yellow card with which no-one quibbled.

Anthony Nash, again delivering a phenomenal display of goalkeeping, distribution and long-range dead-ball striking, came out of goal to nail the second of three, inter-continental range frees and Dublin would never lead again.

Intensifying Dublin’s agonising over how close they came to a first All-Ireland final in 52 years was the fact that at the time of the dismissal they had been showing signs of getting on top of a match in which those who had warned about the impact of Cork’s slicker hurling were vindicated.

O’Dwyer might have taken the simple point on offer in the 43rd minute but went for goal, albeit with sufficient conviction to draw an acrobatic save from Nash. After Conal Keaney, who came in to the match formidably in the second half, had put Dublin two ahead, 1-16 to 0-17, Ryan missed a tricky free to accelerate the momentum.

The new Leinster champions didn’t manage to make a seamless weld between their blistering provincial final display of five weeks ago against Galway and yesterday’s match. Well as they played for much of the semi-final, their play at times lacked the composed decision making of last month when it came to shot selection and clearing their lines.

Advantage pay
Stressed and fatigued by having to play the last quarter a man short against opponents who were recently practised in the ways of making such an advantage pay, Dublin cracked in the closing minutes, giving away a preventable goal, missing a couple of frees and unable to co-ordinate any late rescue acts.

Cork were however steady, moving the ball quickly and with purpose, competing well in the half forwards through Patrick Cronin and Séamus Harnedy against their highly -rated direct opponents and maintaining the focus to snatch back points within seconds of conceding on no fewer than eight occasions in the first half.

There were fascinating indicators of what was to come in the early stages. Danny Sutcliffe’s energetic early point for Dublin from the throw-in prefaced a terrific performance of movement and finishing – he ended with four points from play.

Peter Kelly looked in danger in the sixth minute before a brilliant recovery enabled him to clear from Pat Horgan.

But Cork had their own encouraging straws in the wind. Luke O’Farrell and Conor Lehane, who hadn’t reached anything like potential so far this year, ramped up their displays and made the point with early scores.

Dublin settled however and a tit-for-tat struggle on the scoreboard flashed backwards and forwards like a tennis match for the rest of the first half.

Cork made a particular impact at centrefield where the mobility of Lorcán McLoughlin and Daniel Kearney caused Dublin problems with the former reeling off three points in five minutes in the first half and causing great difficulties for Joey Boland.

The pace
None the less Dublin stayed the pace and just when Cork had opened a two-point lead, 0-11 to 0-9, Paul Ryan held up the ball and showed the team’s play at its best disdaining the easy point and picking out the incoming David Treacy who slalomed past two defenders and booted the ball into the net to restore Dublin’s lead 1-9 to 0-11.

Once Dublin’s third-quarter momentum had been stunted, the match started to slip away. Cork’s score-taking maintained its relentless rhythm and Conor O’Sullivan reprised his extra-man role from the quarter-final. Dublin fought but often with the frenzy of a drowning man rather than a front-foot boxer. Liam Rushe heroically raised his game to meet the challenge but equally could have been red-carded for hitting Horgan with the hurl in his impatience to break free.

Michael Walker: Ian Baraclough staying on trend, from Sligo to Windsor Park 06:00
Matt Williams: Six Nations must recognise the desire for revolution outside Europe 06:00
Sport crosses its fingers yet again as ministerial merry-go-round gets another spin 06:00
Aidan O’Brien targets historic eighth Epsom Derby win with strong hand 06:00
Leicester seek to flatten their dismal curve and end season on a high 22:30
Crossword Get access to over 6,000 interactive crosswords