Dublin ease past Antrim and into Walsh Cup semi-finals 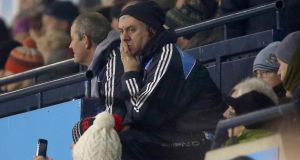 Ger Cunningham looks on from the stands during Dublin’s Walsh Cup win over Antrim. Donall Farmer/Inpho

Ger Cunningham said he’s undecided about Dublin’s next captain after watching his inherited side cruise to the Walsh Cup semi-finals.

They’ll play Laois next though if they do ultimately win the competition it remains to be seen who’ll raise the cup.

Sticky patch
“We have no captain at the moment, we’re rotating it,” said Cunningham. “ We’re going to look at different people and we’ll decide in a few weeks’ time.”

Treacy was excellent from placed balls and open play at Parnell Park while Danny Sutcliffe and Mark Schutte shot five points each.

Dublin endured a sticky patch in the third quarter when Saffrons sub Ciarán Clarke inspired the visitors. Clarke shot 1-1 to help reduce their arrears to just four points with 20 minutes to go.

But they were down to 14 men at that stage after Eoghan Campbell’s dismissal for a wild pull on Sutcliffe. Neil McManus saw red late on too.

Dublin took advantage of their extra numbers to eventually burn off the northerners.

Conor Murphy played the full game in defence for Dublin while fellow rookies John Hetherton and Shane Stapleton lined out in attack.

Dublin moved 0-14 to 0-5 clear after 30 minutes with 10 of those scores coming from Treacy and Sutcliffe. Eddie McCloskey fired a 35th minute goal for Antrim but Dublin led 0-16 to 1-5 at the interval.