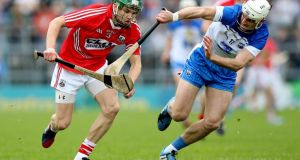 Cork’s Alan Cadogan in action against Shane Fives of Waterford. Cadogan proved a thorn in Waterford’s side during the drawn encounter and scored four points from play. Photo: James Crombie/Inpho

MUNSTER SHC QUATER-FINAL REPLAY
Cork v Waterford
Sunday, 3.30, Semple Stadium Live on RTE.ie
It’s strange to think that in the wake of Waterford’s ambitious display two weeks ago and Cork’s almost terminal lassitude, the bookmakers’ odds have hardly shifted at all. There’s strong evidence to support favourites in replays but surely Waterford did enough to be regarded as better bets this time around?

Derek McGrath’s team is also strengthened by the return of Shane O’Sullivan and Shane Fives, who put down half an hour in the drawn match, after suspension and injury, respectively plus the return of former All Star Stephen Molumphy and possibly Maurice Shanahan to the bench.

The question of which team will improve more isn’t as straightforward as it appears. Given how poor Cork were for long periods it would seem obvious that they’ve more scope for improvement but had Waterford sorted out the Patrick Horgan situation they would have been able to hang on to a lead that at one stage hit nine points.

Horgan switched out to the half forwards and freed from Noel Connors, was able to exert a significant influence on the comeback. Jamie Nagle’s not cut out for zoom-lens marking duties and Connors is probably needed in the corner but surely McGrath will have a more interventionist strategy should it happen again.

Neither is Alan Cadogan likely to get the same latitude again and although his four points from play were fitting reward for a lively performance, he will have a contest on his hands if as speculated Tadhg de Búrca picks him up tomorrow.

Cork manager Jimmy Barry-Murphy was both impressed and appalled by his attack’s ability to cut off enough to survive from 20 minutes’ full engagement on the part of about half of the forwards.

More worrying for Cork was the clear evidence that they hadn’t really rediscovered themselves after a humdrum league campaign that had concluded rather luckily in promotion. Despite the eight weeks’ break to work on their game, last year’s All-Ireland runners-up failed to raise their game.

Patrick Cronin, the team captain, was in the doldrums.

There are equally issues at the back for Cork.

Waterford might improve on the last day but Cork have so much scope to do things better that the belief here is they will do enough of them to win.

1 Gordon D’Arcy: Change has to happen before Ireland's trip to Paris
2 Solskjær says United ‘suffer’ when absent from Champions League
3 Dan Tuohy explains ‘rotten to the core’ comments
4 Kevin Seaward: ‘The first time I wore the Vaporflys, I hated them’
5 Koepka takes opposite stance to McIlroy on proposed Premier Golf League
Real news has value SUBSCRIBE