Clare can maintain their good record against Cork 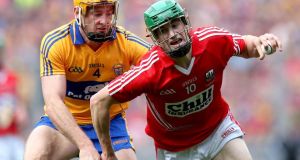 Cork are ostensibly ahead of the curve this year, having played two championship matches against Waterford whereas their opponents are only out of the traps this weekend. Jimmy Barry-Murphy’s side has also undergone some radical surgery with a third of the team essentially new to this level.

Then again last year it was Cork who entered the championship at semi-final stage to face a Clare team, who had already beaten Waterford.

Match practice didn’t count 12 months ago when Cork’s victory margin of eight points was the biggest between the counties all year.

Clare come into this with the confidence and practised teamwork of All-Ireland winners but they have issues. Pádraic Collins aggravated a hand injury in the county’s football match last week and may struggle to make it tomorrow.

This will be an important cockpit because Cork’s half forwards were very good in the Waterford replay and last year Séamus Harnedy was man of the match when Cork beat Clare.

Cian Dillon timely return to form for Crusheen in the county championship will be significant as there were signs that Patrick Cronin was finding his feet again at full forward last week – a position in which he did well against Clare in last year’s All-Irelands.

Missing for Clare will be last September’s hat-trick hero Shane O’Donnell . Cathal McInerney is a likely replacement but although a good finisher he lacks O’Donnell’s predatory pace. However Hurler of the Year Tony Kelly and Colm Galvin have been in good form for the under-21s.

The defusing of Anthony Nash’s free-taking goal threat is a blow for Cork. Jimmy Barry-Murphy’s team are still a work-in-progress and will find the going a lot harder than last week’s.

We can’t assume Clare are going to hit the ground running and take up where they left off last season but neither can we assume they’ve regressed. Both teams will be very motivated to secure a Munster final place against Limerick but Clare deserve to be marginal favourites.