Clare build up early head of steam and prove unstoppable 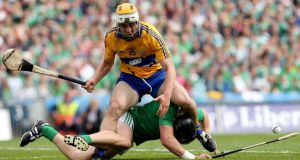 Stitch one, purl one, save one, win one. Win it all? Can’t rule it out. Not now. Not after Davy Fitzgerald’s defiant and doggedly structured Clare team tipped and tapped their way to just the county’s seventh All-Ireland final with a 1-22 to 0-18 win over Limerick.

In front of a crowd that was 62,962-strong, they had a day when every dot on the blueprint found its i and every cross its t. Skyscrapers have been built to less rigid specifications.

For Limerick, this was death by computer programme. They were Kasparov, sliced and diced by Deep Blue. Clare won because they played the more accurate hurling – not just in front of the posts but from defence and through midfield as well. They were patient in possession and tried to put a name on every ball.

Outhurled
By comparison Limerick were snatchy when they went short and sloppy when they went long. It was like watching a team of forensic accountants outhurl sailors on shore leave.

Nowhere was the difference between the sides better illuminated than in the shots they took and the shots they made. Limerick ended the day with 13 wides, Clare had five. Ten of Limerick’s were on the board by the 30th minute, by which time they were 1-8 to 0-5 behind.

And when John Allen’s side came back into the reckoning after the break to cut the deficit to four with half an hour to go, Clare didn’t strike a wide until the 69th minute. If the shot wasn’t on, they didn’t take the shot. If it was, they nailed it.

“Jeez, that’s a change for us only to have five wides, I’ll tell you that,” said Fitzgerald afterwards. “Normally you’re looking at 15 or 16, that’s our average most weeks, so I don’t know what the story is! I hope we didn’t use it all up today.”

Clare’s forwards were foot perfect here. Tony Kelly buzzed around the pitch and stitched four points as if he wasn’t the youngest player in a young team and Podge Collins continued his brilliant summer with three of his own.

But it was the nigh-on faultless free-taking of Colin Ryan that won them the game, his 11-point haul containing nine from placed balls. The duel between him and Cork’s Patrick Horgan will be one of the factors that decides the final.

By contrast, Limerick’s Declan Hannon had a mortifying first half. He spilled three frees and a 65, all but one of which you’d have given him in a friendly morning’s golf.

Unbiased eyes
His jitters seemed to spread throughout the team and it wasn’t until substitute Shane Dowling assumed free-taking duties in the second half that Limerick settled . They scored 12 points and only had three wides. But by then the hole was too deep, as Allen conceded afterwards.

“The better team won, that goes without saying,”. said Allen afterwards. “We never got a hold on the game. Obviously I’m looking through green eyes, and focusing on my own team, but you saw it with unbiased eyes and you’d have to say we were chasing the game all the time. We made poor use of the ball, our conversion rate was poor, our free-taking wasn’t great. All of that added up.

“Having said that, probably if we had converted the frees we missed in the first half we might have gone in only two points down [at half-time] instead of seven points down. But that’s grabbing at straws. We weren’t winning any line, we weren’t dictating the game and at the end of the day, unless you’re winning a lot of the battles you’re probably not going to win the game and we weren’t winning enough of the battles. That’s the bottom line.”

For the second week in a row, the team with the five-week break fell to the team who’d scrapped through the qualifiers. Allen was at pains not to use it as an excuse afterwards but reached for it as an explanation and said it wasn’t ideal.

“We’ve beaten Waterford who were in four semi-finals and a final. We’ve beaten Galway who were in the All-Ireland final last year. We’ve beaten Limerick. We beat Wexford who drew with Dublin earlier this year. We beat Laois. The games stood to us. They were good alright and I’m delighted with the quality of opposition we’ve beaten. We’re going into our seventh game in the championship – Jeez, that’s great. Isn’t it great to be playing these games?”

No burden
It’s no burden to be watching them anyway, even if yesterday didn’t come close to living up to the fruit machine ding-ding of last weekend. All the same, it leaves us with a Cork v Clare final for the first time in the old game’s history. A Grand National of a summer reaches the elbow with two left standing, then. Take your pick for the run to the line.