“He might just throw anything out there just for the sake of throwing it out?” says top Cat 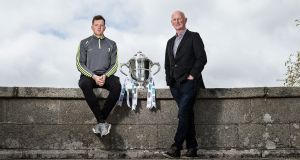 Kilkenny’s Walter Walsh and Brian Cody at the launch of the Leinster championship. “It’s a good starting point for any team to be functional, I’d say,” said Cody. Photograph: Dan Sheridan/Inpho

Brian Cody lets a smile half-flicker as the name Ger Loughnane is tossed into the conversation. He knew it would come, he knew it must come. We’re in the Pearse Museum in Rathfarnham to launch the Leinster championships, 100 years to the day since the leader of the Rising was executed.

Since then, if you can fathom it, Cody has taken part in 29 championship campaigns as either a player or manager. It will take more than a few words of mischief from Mr Functional Beyond Belief to get Cody ducking and weaving.

“Well I just know how I take Ger – he’s a gas man!” Cody says. “And I enjoy Ger, and I know Ger a long time. And he’ll say whatever . . . he might just throw anything out there just for the sake of throwing it out. Also, he maybe believes what he says as well, and that’s his opinion.

It’s our first time getting an audience with Cody since Loughnane’s bit of merriment on the GAA website a few weeks back so we try to pin him on it. Did he think that in a backhand kind of way, his old college friend might have been paying Kilkenny a compliment?

“Well, you see, I don’t know what he means by it. And again, if we were to concern ourselves with what all the various people say about us, you’d be working overtime trying to figure out why did he say this or who does he think he is?

“We just concentrate on what we’re doing, and that’s it. Ger knows that, and it’s for his fellow pundits and the media and everybody else to discuss the merits or the demerits of what he says . . .

“Look, Ger is a very enjoyable fella. We’ll have a chat about it sometime, maybe he’ll tell me exactly how he thinks. But I wouldn’t think he ever tells anyone what he really thinks, anyway.”

Cody was in Thurles on Sunday for the league final, watching two teams that set themselves up to cancel each other out. It’s always a fool’s errand broaching this sort of thing with Cody – his default setting is to colour himself bemused, as though he were a philistine made to tag along to an outing in the Louvre.

“But look, that’s the way the game went and next Sunday will be interesting. Will they come up with the same thing again? Will they try something different? Both sets of management teams do think a lot about the way they play and that and it’s going to be very interesting to see what they do.

“That’s the prerogative for everybody in charge of each team; to come up with whatever way you want to play the game and it’s going to be very interesting to see what happens.”

And as for TJ Reid’s suggestion that Kilkenny might need a sweeper come summer?

“I must have a chat with TJ to see what he has in his mind there for that,” smiles Cody. “He’s a shrewd tactician I’d say alright.”

Meanwhile, in another corner of the room – hurling-wise, on another planet – Offaly manager Eamon Kelly is trying to make sense of what happened to them against Westmeath.

“A lot of frustration,” he says through a pained expression. “We are doing it on the training pitch but we’re not implementing it on the day of a match. That’s what matters. In some ways it’s a good thing that we have a short turnaround, we don’t have to be dwelling too much on last week, try to get back and get a performance at least.

“We had a game plan and we didn’t implement it. We seemed to be second to the ball, we didn’t seem to be up for the fight. Westmeath, it was a credit to them, they were flying, they wanted it more and they got the result.

“Status in the game is fine – tradition and fantastic teams won All-Irelands in the 80s and 90s and all that. But that came on the back of winning minor and under-21 All-Irelands. The success hasn’t been there. What’s realistic or unthinkable, I’m not sure. All I know is we have a group of players who are not playing to their potential.”