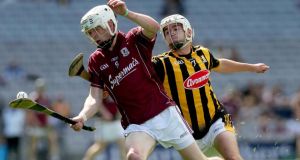 Three times these stubborn Galway teenagers, jolted to life by the threat of what seemed their inevitable demise, snatched this game from Kilkenny clutches.

That they forced extra-time before almost stealing victory won the support of the Waterford contingent in a swelling Croke Park earlier than expected. This at least combated the increasing roars of Kilkenny folk who had been heaping pressure on referee John O’Brien. “There was 40,000 Kilkenny supporters there. We’ll get the whole of Galway up next week. The races are over,” said Galway manager Jeffrey Lynskey with a hint of seriousness ahead of Sunday’s three course hurling feast at headquarters.

At times a thrilling spectacle, interlaced with marvellous points and multiple errors, Galway were guiltier of the latter but struck two wonderful goals when it mattered.

“A lot of them are only 17,” was how Lynskey explained scoring droughts of eight minutes, 12 minutes, 16 minutes and most of the first half of extra-time as Kilkenny rigidly went about score gathering from distance. (Galway captain Seán Loftus made light of the number 15 on his back by sweeping in front of his fullback line to douse Kilkenny’s goal scent.

“People failed to realise that it is a huge occasion for them. We would of spoke about it for the last two weeks – the importance of it – but when you are hurling, when you are out there, you don’t really see anything else.

As Kilkenny threatened to destroy them, it took soothing words to remind the young Tribesmen, perhaps spooked by the occasion, of their natural talent.

“They were six points up,” Lynskey explained. “I spoke to the boys at half-time in extra time, ‘Look lads, you need to go point for point.’ We filled them up again, got the heads focused and they went out. When you have honest fellas on the pitch they are never going to give in. That’s what happened here today.” And so much more besides. Like Andy Gaffney’s nerveless accumulation of 0-10 before his 90 metre free at the death fell just short.

Or a wonderful point by Kilkenny corner back Michael Cody. And there was 1-3 from Galway’s Thomas Monaghan before a worrying injury intervened. The benches mattered too. Conor Hennessy arrived to hit three important Kilkenny scores while big Cian Salmon took up residency near the square and eventually plundered the goal that sparked Galway’s late revival.

Simon Zebo set to return to Munster next season 13:00
Seedorf wants to ban players from covering their mouth while talking 11:44
Liverpool leaning on Salah more than ever right now 11:20
Four Leinster players nominated for European Player of the Year award 10:37
Chelsea have a free hit from here but may not get a better shot at it 08:49
Crossword Get access to over 6,000 interactive crosswords