Banner to be unfurled at end of a terrific year 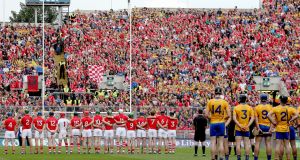 Clare and Cork stand to attention before the national anthem prior to the start of the drawn All-Ireland final earlier this month. Photo: James Crombie/Inpho

Hurling this evening gets the chance to sign off on the 2013 championship with a great finale to a memorable season. It will be the first All-Ireland final to be played fully under the Croke Park lights – which were briefly switched on for the hurling final two years ago – and it takes place on the 85th anniversary of the passing of Liam MacCarthy, whose eponymous trophy will within hours be on its way to Cork or Clare.

Maybe it’s the fear of being accused of inconstancy but back-tracking on original predictions between draw and replay is relatively rare. This All-Ireland hurling final replay however puts extreme pressure on anyone who felt that Cork would win the first match.

The outcome still remains precariously balanced because the drawn match left in its wake so many intangibles. Yet the options thrown up three weeks ago can be reduced to a stark choice between Cork’s scope for improvement and Clare’s manifest superiority.

Nagging anxiety
Psychologically, who gets the replay bounce? Clare dominated to a staggering extent and would have been devastated to lose. They coughed up a five-point lead with 15 minutes left – not a massive buffer by hurling standards but reflective of a team comfortably on top. There has to be a nagging anxiety that they may pay the price for not winning the first day.

Yet similar considerations apply to Cork. True, they got pinned on the ropes for so long during the drawn match that were the boxing ring not metaphorical they’d have been beaten to death but crucially, thanks to the virtuosity of Patrick Horgan’s conjuror’s trick of a point in injury-time, they led an All-Ireland final with just seconds (plus!) on the clock.

In other words who exactly left behind the better chance?

The trusted old rules of the replay are: who has learned more from the draw and who has most room to improve?

Although the assumption would be that Cork must be the answers to both a) and b) that is not necessarily the case. Clare after all have discovered that Cork actually do possess a goal threat and even if consensus discourages reverting to a sweeper system, there’d be nothing too disruptive about simply paying more attention in defence.

The issue of improvement isn’t as cut and dried as aspects of the drawn match suggest.

For all of their exuberance, Clare allowed the high level of accuracy that distinguished their semi-final win over Limerick to slip and although they haven’t been banging in goals this year, they had managed six in their previous four matches (including two in extra-time against Wexford).

In many ways the first day represented a Herculean struggle by Cork. Beaten all over the field they somehow clung on to a match that they led for less than two minutes.

They had to stretch for miracles of husbandry: three goals at the end of a season throughout which they had until then managed only one and even more strikingly three wides – none of them from play but from two frees and one line ball.

Any idea that it can’t get much worse for Cork would be questionable. Allowing that Antony Nash might fancy his prospects if he gets three more – properly regulated – close-in frees or penalties, the three goals were triumphs of perseverance. Nash having to make the dauntingly conspicuous walk up the field in the second half having been blocked already on his first opportunity, Conor Lehane struggling for his best form all summer taking on the defence and shooting the first goal and Patrick Cronin, preparation disrupted by illness and at odds with his game, clinically dispatching the third.

There may not be any opportunities for Nash to demonstrate his formidable striking close to goal, especially if Clare register improvement in the one area that cost them – discipline and giving away the frees that extended their beleaguered opponents a lifeline.

Drawn encounter
There’s also the slight but interesting historical context that of the last five All-Ireland series matches (two quarter-finals, two semi-finals and last year’s final) to require replays, none of the winners had scored more goals in the drawn encounter and in three of those years, the team that ultimately lost out was the one that had raised more green flags.

One of the big advantages going into the first match was the wealth of All-Ireland experience Cork had on the sideline and whereas Jimmy Barry-Murphy and his associates didn’t panic and made useful switches this becomes less of an issue going into a replay.

Anyway, Clare were less inhibited from the start and the exuberance of their performance is unlikely to leave them feeling more nervous this time.

None of this is to deny that there’s better in Cork. They may switch Brian Murphy onto Pádraic Collins in an effort to contain the Cratloe forward who has shot eight points from play in the two championship matches to date between the teams even if this would be to risk an unfettered Tony Kelly. They have brought in Cian McCarthy to try and replicate the half-forward superiority of the game in June but Clare’s form on this line has been transformed, as evidenced by Conor Ryan’s man of the match display three weeks ago.

In a way Cork have simply too much room for improvement. They can play a lot better and still lose. Evidence suggests the tables have turned irretrievably in Clare’s favour.