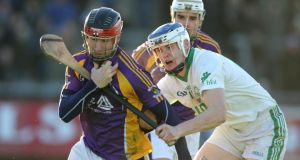 Onwards for Ballyhale, their ultimate destination looking more and more a matter of their own choosing. They put Kilmacud away under a blinding winter sun with the ease of a nanny tidying toys into a box. They led by five after six minutes, by nine at half-time and the same at the end. In between, they never allowed the Dublin champions to imagine what a win might look like.

This was regulation stuff as the Kilkenny side eased into their first Leinster final since 2010. TJ Reid filled his boots to the tune of 1-8, albeit that the goal came from a long-distance free that Crokes goalkeeper Matt Collins dropped into the net.

Cha Fitzpatrick was a slinky, ethereal presence as well around the half-forward line, insinuating himself into matters when the need arose.

Henry Shefflin finished the afternoon with 1-2 from a game in which he was often the sole occupant of the Ballyhale full-forward line. You’d think a man of his years would have someone to do the fetching and carrying for him but no, he did his own driving here.

At the end of the game, the tannoy appealed for no kids to run on the pitch. No chance, not when Shefflin was standing there. There have been other days when he was far more effective but star quality doesn’t need a number in brackets after it.

Besides, Ballyhale didn’t need him to be King Henry here, He sent them on their way with the first point of the day and then flicked home a goal by getting to a Colin Fennelly effort before Collins after five minutes. After that, it was an accounting exercise.

“We have personnel who can do well in this competition and have done well in it before,” said Ballyhale manager Colm Bonner afterwards. “It’s a case of just recharge the batteries now and try and get as much out of them as we can on the day. I think today they showed a great appetite for it - there were a lot of physical challenges going in there.

“We were tired at half time but knew they would feel it as well. In the end it dwindled out because both teams were tired. But we have one more game in us and we have two weeks now - a week to recover which the older lads will need. So we’re happy at this stage to be looking forward to a final.”

Ballyhale led 2-9 to 0-6 at the break, Reid’s flukey goal just short of killing of Kilmacud’s spirit once and for all. Ryan O’Dwyer popped frees for the Dublin side throughout the second half but they never threatened the goal that would bring them back into it.

In fairness, neither did Ballyhale and as the sun started to dip behind the clubhouse, they played out a drab second half, only scoring 0-6 apiece.

Ballyhale meet Offaly side Kilcormac-Killoughey in the final in two weeks.