Anthony Daly: the man, the captain, the friend, the manager, the motivator 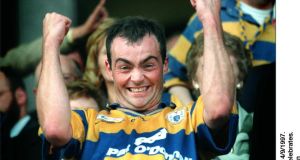 “There has been a missing person in Clare for 81 long years. Well today, that person has been found alive and well . . . ”

Cold case files
He has been in Dublin six years now looking for that same missing person. Drives up from Clare several nights a week to lead the search party.

Has already found Bob O’Keeffe, who’d be missing for 53 years.

An expert of the cold case, if you are lucky in life you have encountered a friend/coach/boss like Anthony Daly.

If not, you know him when the adrenaline is sky-high after a game, when quick-witted words can sound like the wailings of Charlie Manson or an old culchie sage.

But if you know a man like him, you will see how he rises in the early hours, be it after a night on the tiles or a ridiculously taxing day of sport.

You will see what others so rarely do. You see the indescribable.

Constipation
Daly could be Yeats’ Fiddler of Dooney. He who goes before Peter sitting in state yet doesn’t have to cadge his way into the big house. Brother and cousin, priests both, must sit in the sauna of purgatory, sweating out their sins, while the rogue, if ever there was one, is asked first through the gate.

For the good are always the merry, save by an evil chance

You know not of the Dublin hurlers seeking him out this past winter to ensure the crushing, premature defeat to Clare in Ennis was not the end of their music-making together.

We don’t know Anthony Daly. But Fr Harry Bohan and Ger Loughnane do. We asked these pillars of Clare hurling about their former captain. The man who led The Banner into the battle that broke the curse of Biddy Early.

“I saw him not staying on after last year,” said Loughnane. “Portlaoise was bad but to be in Ennis that night and to see how bad it was it seemed like the wheels had not only come off the wagon but had got smashed and could never be used again.

“I think a few things changed his mind. First, he didn’t make an instant decision and secondly the players in Dublin wanted him back. That was the vital thing.

“I think they realised they were responsible for the flop.

“But it was tough when he went back. Think about Tipperary and the first day against Wexford.”

“As John F Kennedy said (a new generation of Americans) ‘tempered by war, disciplined by a hard and bitter peace.’ Well, his team had been tempered by defeat, by hardship.

“That’s what makes Dublin so strong now; that they have come through that hardship.”

The dream
Father Harry has been a fundamental part of Clare hurling since the 1970s. Alongside Loughnane in the 1990s, he came back into the fold when Daly took over from 2003-06.

“Whenever things had to be done with players on the quiet Anthony did them,” said Fr Harry. “When players needed to be kept together and kept happy and making sense of what Ger was at Anthony would often put them onto a bus and take em off. Get them to talk it out among themselves.

“He’s an unbelievable communicator. He has a dictionary with words.

“Ah, Anthony Daly is a very, very exceptional man. He has a great soul and I don’t mean that in a religious sense, but in a deep sense of people.

“You remember the free he took in ’95 that won the All-Ireland?

“I said to him one time, when the two of us were chatting one evening, ‘Mother of God, you must have a brass neck that you walked out past Seánie McMahon, the best free-taker in Ireland at the time, and said you would take that free.’

“He said to me: ‘I took that free about 500 times. I dreamt one time that I would get a free to win an All-Ireland with Clare in the last minutes. And the very second your man blew it I instinctively said, ‘I’ll take it’.

“He scored it but I said, ‘If you missed it you would’ve had to take a one-way ticket to South Africa!’

“He’s that type of soulful, instinctive kind of guy.

“He would get to know players – and I am talking about leadership now – and great leaders know for the most part who and why they are leading.

“There are very few people I know that would bring people with him like he does.

The captain
For Loughnane, despite initiating mass change when arriving as Clare manager for 1995, it was no choice at all to leave Daly as the leader of men like the Lohan brothers, Seánie McMahon, the ‘Sparrow’ Ger O’Loughlin and Jamesie O’Connor.

“He was born to be a leader. Definitely through his time in St Flannan’s from under-12 up to Harty Cup.

“You didn’t have to be a genius to spot leadership qualities in his body language. He wasn’t intimidated by anyone or anything. He always had a clear vision of where he wanted his team to go.

“That made him brilliant at sizing up situations, of thinking on his feet. You couldn’t get a player with sharper awareness of making the right decision and saying the right thing at the right time.

“Making him captain of Clare was a no-brainer because he was young and the players already looked up to him. He had one of those magnetic personalities.”

A foil for yourself then?

He Laughs: “ He was automatically tuned in to the message I wanted to get across!

“The thing that stood out most for me was with all those dummy teams Clare had you just couldn’t fool him. He would know what you were thinking.

“It’s few enough people who had that quality.”

Anthony Daly the manager (2005-06 version)
“There was a gathering of the Daly clan when I said mass at his father’s grave,” Father Harry said.

“There was a hundred of them come back from England and Australia. We were having a chat with the family when he suddenly went off in an explosion about how close we had come.

“We drew with Kilkenny. Beaten in a replay. We played Cork, went six points up and lost it by a point in the last minute.

“People said he was foolish as too many of the older players were finished but sure the likes of Seanie McMahon, Colin Lynch, Frank Lohan and Brian Lohan got a whole new lease of life under him.

“He was awfully close to winning two All-Irelands with Clare as a manager.”

Daly knows what is happening. He has seen this before. He stands like a stone monument on the line. Brian Cody sees it as well.

Cody’s eyes blacken, head nodding slowly but Daly, remarkably, turns to him and apologises. He was keen to avoid anything unnecessary because he knew there was no need to get distracted by confrontation.

Dublin drive on. Paul Ryan and Dotsy O’Callaghan land the next two points.

“He has brought a serious amount of edge to their game and they are hurling with a lot of skill now. They didn’t have it when he went there.

“He’d be very big into the mind of a player as well. That’s why he pulled in Tony Griffin. ”

The mind game
The moment Dublin were cured of constipation came quickly after the draw in Wexford Park on June 8th.

“We had a good meeting the night after in White’s Hotel,” Daly recently revealed.

“Michael Carton, he is a fireman, we had only the one fireman that night, you know, a lot of lads were jumping out of the burning building and the fireman was going in the front door. He went up the field that night and got a point and kept us in it.

“Fellas were trying to be honest with each other and saying that’s not good enough and can we improve ourselves for next week. I think we improved a lot more than we got credit for the second night.

Kilkenny were supposed to punish them for not closing the door fully in the drawn first game on June 22nd.

Then they pushed on again and streaked past Galway in the Leinster final.

“It was nice to have Bob O’Keeffe in the dressing room. We had spoken a lot about him.”

Eighteen years later, Daly knew how to harness such power and confidence.

“I’ll tell you a good one I read in some book, when it was all over in the early 2000s. Damien Quigley, who I often marked in my early days at corner back, would have said in ’95 they took us a bit for granted on the day and probably should have beaten us. They (Limerick) beat us in ’96 with the late surge but he said he couldn’t believe the difference in the fellas even when they won the match. But sure we were the same fellas.

“We had probably trained less and celebrated all that winter, a bit longer than we should have. We lost the match and we were out.

“But I remember him saying he felt there was another All-Ireland in Clare because of what he had seen that day.

Daly understands the psychology of winning better than most.

“Look it, if you give up you give up. That’s the end of it. You won’t be doing that anymore. You move on to do something else.

“We are only on this planet for so long. We stayed at it I suppose.

“This time last year I didn’t know whether it was worth keeping going for our side of the table – Richie, myself and Hedgo – and for the players; would a fresh voice be the world of good for them as I know they are good lads?

“They wanted us to stay and I suppose in our souls we wanted to stay. We are glad we did now.”