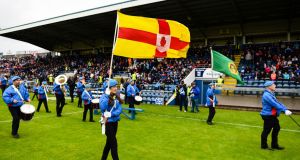 Donegal take on Tyrone in the game of the weekend at Kingspan Breffni Park. Photograph: Tom Beary/Inpho

It’s the first weekend of the football qualifiers and that means we’re in for a busy Saturday and Sunday of GAA action - what could be better. In all there are 16 matches across the football and hurling championships, the pick of the bunch being the Ulster football semi-final between Donegal and Tyrone. It’s also the penultimate weekend of the Leinster and Munster hurling round-robins, so lots to be decided. Or nearly decided.

What’s on the TV?

Donegal and Tyrone’s Ulster championship clash will be live on RTÉ from 4.15pm and on BBC 2 from 4.45pm. While Sky Sports are heading down to Pairc Ui Chaoimh where their coverage of Cork v Waterford in the Munster hurling championship gets underway at 6pm (Sky Arena).

On Sunday RTE are sticking with the hurling, with their coverage (on RTÉ 2) beginning at 1pm and taking in Kilkenny v Galway and then Limerick v Clare. At 9.30pm The Sunday Game will as always have highlights of all the weekend’s matches.

Where do we stand with the Leinster hurling?

Leinster is wide open. Carlow need to beat Wexford on Saturday evening to avoid certain relegation to the McDonagh Cup. If Wexford win, and Kilkenny beat Galway, then the loser of Dublin and Galway on the final day will exit the Championship regardless of the result between Kilkenny and Wexford that weekend. If Galway beat Kilkenny on Saturday then the Cats are right back in with the rest of the contenders.

A win in either of their last two matches will guarantee Kilkenny a Leinster final, while Galway will need two wins to be sure of their place, unless Wexford lose to Kilkenny or Carlow. Then one win or even a draw could do them. Only six points will be enough for Wexford to reach the final - unless Kilkenny beat Galway and the Tribesmen then draw with Dublin. At that point four points would bring Wexford to a scoring difference contest with the latter two.

So all in all, a defeat for any of Kilkenny, Galway or Wexford (Dublin are not in action) this weekend will not end their qualification ambitions. Carlow's fate aside, this weekend only really sets up the running for the following one.

And down in Munster?

Contrary to what you might have read or heard over the past week, Waterford are not mathematically out of the Championship. Albeit they’ll need a miracle over the next fortnight to continue their season past Saturday afternoon. If Waterford were to beat Cork, and the Rebels also lost to Clare a week later, as well as Limerick losing both of their final two matches, then Limerick, Cork and Waterford would all be on two points. Meaning the team with the best scoring difference would progress. Before we give fans of the Deise too much hope however, let’s remind ourselves that their current scoring difference is minus 39 points.

If Cork do beat Waterford though, Limerick will need to get something from their match with Clare to keep their season alive. As a defeat for the reigning All-Ireland champions would leave them on two points, and Cork and Clare both on four. The latter two play each other in the last round of matches and the loser would still edge Limerick on a head to head, even if they were to beat Tipp. Cork need to win their last two matches to guarantee a place in the top three while Clare will get two shots at it. A win against either Limerick or Cork will secure their progression.

If Limerick and Cork both win their final two matches, Tipp can still drop out of the top three on scoring difference, although they are currently plus 38 points. Any other outcome and they’ll be in the Munster final.

So the breakdown for Saturday is?

Tyrone versus Donegal is the game of the weekend so do not miss it. Last year’s Ulster champions against the All-Ireland finalists. And, believe it or not, both teams are playing an attractive brand of football this year. Read about Tyrone’s new three-pronged attack here.

In the qualifiers I’ll be keeping an eye out for Derry, they were impressive against Tyrone, but can they take that defeat on the chin and continue their good progress so far in 2019?

The biggest qualifier clash of round one sees Monaghan host Fermanagh, the team who knocked them out of last year’s Ulster championship with a late goal. Down host Tipperary, despite being second out in the draw, because Tipp are (or rather they were) a Division Two county. They are one of only three teams from Division One or Two who are in round one action.

Paul Mannion had his red card against Louth cleared on Thursday night, so he is available for Dublin’s clash with Kildare. Laois are aiming for back-to-back Leinster final appearances, after consecutive league promotions. While their opponents, Meath, are many people's fancy for a place in the Super 8s after being promoted to Division One, so that should be an interesting encounter.

Cavan and Armagh going at it again should be another good contest too, Cavan are aiming to reach a first Ulster final since 2001. In that time every other Ulster county has contested a final. It was 2008 when Armagh last won it though.

The big story in the Joe McDonagh Cup is the increasing likelihood of Offaly being relegated down to the Christy Ring Cup. If Kerry beat Laois on Saturday then that will be confirmed.

In the Munster minor hurling round-robin, Cork host Waterford on Saturday afternoon in Pairc Ui Chaoimh (5pm) while on Sunday at 2pm Limerick take on Clare at the Gaelic Grounds. In the Leinster quarter-finals on Saturday, Laois face Wexford and Kildare take on Offaly.