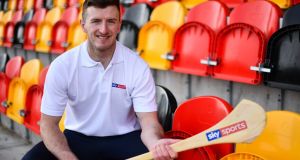 Pat Horgan: “I actually couldn’t see the point of doing it behind closed doors. When you can hear the ball hitting off the hurley around the whole stadium, I just don’t see it being too interesting.” Photograph: Sam Barnes/Sportsfile

Cork’s Patrick Horgan has admitted the idea of playing championship games in empty stadiums is a real turn-off and that he’d be open to a condensed campaign based on the old knock-out format.

The GAA’s inter-county fixture schedule has yet to be affected by the coronavirus issue though there are fears that the closing stages of the Allianz Leagues may have to be completed in empty stadiums.

Should that situation drag on into the summer, it could mean championship matches being played in front of empty stands and terraces.

“I actually couldn’t see the point of doing it behind closed doors,” said All-Star forward Horgan speaking at a Sky Sports launch for Inside the Game on Wednesday.

“When you can hear the ball hitting off the hurley around the whole stadium, I just don’t see it being too interesting. For players it wouldn’t be good. I’d prefer not to ever see that, it wouldn’t be great.

“I don’t know, I wouldn’t fancy it anyway. I don’t think any player would. That’s part of the buzz, when you go into a full stadium after training for the last eight or nine months, to get a bit of buzz off the whole day, the atmosphere and the whole lot. Going in there and there is nobody there, it wouldn’t be good.”

Horgan said he has played plenty of challenge matches in empty grounds and reckons that’s what a championship match in front of vast empty seats would feel like.

“Those are normal challenge games but when you go into a Munster championship game the crowd gives you an extra boost, without that I don’t know what it would be like,” he said.

“It would be weird. It’s the whole buzz of coming into the stadium, there are hundreds of people coming in at the same time and you’re going out then maybe to watch the game beforehand, the stadium is nearly full, you’d certainly notice it alright if all of that wasn’t there.”

Experienced Horgan said that if the early stages of the championship are affected, and if the competitions couldn’t start until June or later, reverting to a straight knock-out format may be an option.

Both Allianz Hurling League quarter-finals are scheduled to take place this weekend, along with football’s penultimate round of games. Cork finished fourth in their Group A campaign and didn’t reach the knock-out stages, leaving them with well over two months of a gap between competitive games.

“Overall, if we break down every game it wasn’t really disappointing because we were very competitive, but just slightly unlucky that we didn’t qualify,” said Horgan who, along with Bill Cooper, started all five league games for Cork and struck 3-49, 3-47 of which came from placed balls.

“All we can do now is go back and train hard, we have nine weeks now to prepare for a really big game down at the Páirc in the first round.”