Quarter-final at Páirc Esler was marred by unsavoury incidents 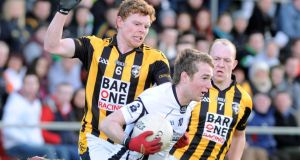 Ulster Council secretary Danny Murphy has insisted the stewards at Páirc Esler were “in control” of the flashpoints in the stand during Sunday’s drawn Ulster club quarter-final between Kilcoo and Crossmaglen.

A number of unsavoury incidents occurred in the first-half of an explosive tie, with a supporter allowed to walk down the steps and get involved in a heated exchange with a section of the Crossmaglen substitutes on two occasions.

There were also several other flashpoints involving a handful of supporters before tensions eased after half-time.

Murphy, who was the event controller in Newry, accepted the game was “a very tense affair” but defended the stewards’ role and denied they had failed to act.

‘Banter’
“The report I have from the stewards was that it was banter and they were in control of the situation,” he said.

“We have CCTV footage but the man controlling the cameras during the game brought nothing to my attention. Unless someone has created a misdemeanour and as long as they operate within the ground regulations, they have a right to be in the ground.

“If they don’t operate within the ground regulations, they can be ejected.

“However, sometimes if you intervene, you can end up with a bigger problem. According to my information, the stewards assessed the situation and were quite satisfied they were able to manage it.”

The game simmered with aggression and tension right from the off, with two players booked for wrestling each other to the ground before the ball was even thrown in.

Allegations
The Armagh and Down champions also met in last year’s Ulster final, a game overshadowed by allegations of racist abuse against Crossmaglen player Aaron Cunningham. Cunningham, who was injured for Sunday’s game, was sitting amongst the substitutes in Páirc Esler on Sunday.

“The game in my mind was too tense and that was transmitted onto the pitch with the incident before the game,” said Murphy.“There was too much looking back on last year and that was in people’s minds.

“We have two very responsible clubs involved and I have no doubt we can look forward to another high quality game in the Athletic Grounds on Sunday. And I think that is what most people are talking about, the game, rather than anything else.”

Crossmaglen manager Joe Kernan called on the Ulster Council to stage the replay in Crossmaglen, a designated county ground. However, as expected, the replay has been fixed for the Athletic Grounds.