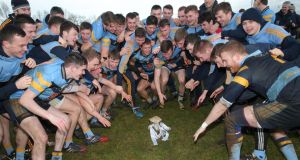 DCU were denied a two-in-a-row by bitter rivals UCD who at last ended their 20 year Sigerson Cup drought with a much deserved two-point victory in Belfast on Saturday.

“There’s one man I have to mention before I go any further,” said the Westmeath full forward. “Dave Billings, I came into this college in 2009 and he treated me like nearly another son. l had to nearly hold back tears before the game. And I’d say every man in a UCD crest today would say the same.”

DCU led at the interval by a single point, 1-2 to 0-4 despite hitting nine first half wides. On the half hour mark, just after the last of those wides had arrived through goalkeeper Philip O’Donnell with a 45, Roscommon’s Enda Smith broke through the UCD defence and found big midfielder Stephen O’Brien who rolled his effort under the outrushing goalkeeper.

Before that DCU’s sole point had arrived through Laois defender Stephen Attride, an outside of the boot effort from distance, much like his sweetly struck effort in the evening previous’ semi-final win over UUJ. This would be DCU’s only point from play in the entire contest.

By then Heslin and Conor McCarthy were amongst the points for a UCD team who were dominating the breaking ball contest around the middle and leading by three, although they would be dealt a double blow with Dublin full forward Paul Mannion limping off after 20 minutes, and Kildare playmaker Niall Kelly being shown a black card seven minutes later.

And so following Shane Carey’s 33rd minute free to put DCU in front for the first (and only) time in the game, UCD looked in real bother.

Playing in their first final since 2003 a Heslin free settled his team into the second half, levelling matters, and on 38 minutes he put his team back into the lead, again from a free.

DCU were struggling to get the ball out of their own half, they were 1-2 to 0-8 behind on the 45 minute mark, still yet to score in second period. Not one of their forwards had or would manage a score from play.

Substitute Conor McHugh entered the fray in the final quarter, giving DCU some means of an out ball. It was he who collected a pass in the corner on 50 minutes, turned and went at his man, peeling off to the left before unleashing an effort across the goal which was palmed away to Conor McGraynor. The Wicklow man was subsequently dragged down, and Conor Moynagh stepped up from centre back to bury a penalty and again level matters (2-2 to 0-8). All despite UCD’s dominance.

By now DCU’s strength in depth was paying dividends, the likes of McHugh, fellow Dublin panellist Shane Carthy and Sligo’s Cian Brehony were introduced and were making a big impact in terms of possession. Although they again struggled to create point scoring chances as the UCD back six kept things tight around ‘the D’ in heavy conditions.

With five minutes left Heslin won a ball between two DCU defenders and whipped over a left footed effort - his marker Kevin Feely had just seen an effort drop short down the other end.

UCD then lost Conor McCarthy, another of their key forwards, to a black card on the hour mark after he dragged down O’Brien coming out of his own full back line – the Tipperary man making the most of the collision. Nonetheless Stephen Coen would increase the UCD lead to two at the start of four additional minutes – yet there would be no more drama from here as UCD held on for a triumph that has been a long time coming in the south of the capital.

Liverpool could seal title win at Anfield when they host Crystal Palace 20:43
Lifting the lockdown: what does it mean for sport? 19:33
GAA club matches to return on July 31st with intercounty games in October 19:13
Betting shops face uncertain future as they prepare for Monday reopening 18:53
Ghaiyyath blazes a trail to take Coronation Cup at Newmarket 16:27
Crossword Get access to over 6,000 interactive crosswords