Tyrone have to work hard to clear a tricky first hurdle 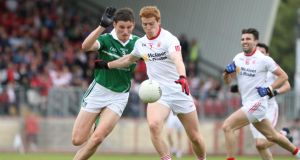 Ring-rusty Tyrone are back on the road, having seen off Limerick with the minimum of fuss and an economy of style at Healy Park yesterday.

The Red Hands looked ragged at times, but the class of Peter Harte and live-wire substitute Mark Bradley gave them the edge over a Limerick side that travelled in hope more than expectation.

Tyrone led by just two points at half-time, but in truth, never looked in danger of losing this qualifier, although they did put a gloss on the final scoreline with Harte’s stoppage-time goal.

“We were very disjointed, we just weren’t ourselves for 50, 55 minutes of that game, and I suppose it’s good to be able to work through an uncomfortable period against a team who had nothing to lose and everything to gain, and we still stuck in there,” said Tyrone manager Mickey Harte.

“We were very disappointed at missing those early goal chances. I don’t know why the goal was disallowed, but maybe the referee had better sight of it than I had.

“If any of them had gone in, it would have settled us a lot better, but the fact that those goals didn’t go in, and Limerick were within touching distance of us at half-time, and into the second half as well, hanging in there, made life uncomfortable for us.

“But at the same time, I’m really pleased at the way they pushed on at the end. The scoreline flattered us, there’s no doubt about that, but I don’t care about being flattered by the scoreline. The main thing is we won the game and we’re in the hat.”

Limerick attacker Peter Nash could find no consolation in an honourable defeat.

“We’re proud enough of the performance, but there’s nothing to be taken from a moral victory,” he said.

And he felt the outcome could have been different had Gearóid Hegarty not been denied a goal by the woodwork in the second half.

“Goals turn games, and that would have made a huge difference to us. We could have been a bit more clinical in spells, we missed a couple of frees and stuff like that, but we expended so much energy working so hard trying to keep the game within our grasp that that’s probably what happened.”

Limerick lost centre back Cillian Fahy to a black card after just five minutes, but they maintained their defensive discipline in the face of waves of early Red Hand raids.

Mattie Donnelly, Seán Cavanagh and Connor McAliskey all swept over scores as the home side eased into a three -point lead inside the opening ten minutes.

Goalkeeper Brian Scanlon was off target with a couple of long-range frees as the Munster men went in search of that elusive opening score, which eventually arrived off the boot of Hegarty in the 15th minute.

Cathal McCarron thought he had scored his first Tyrone goal, but the corner back’s fisted effort was ruled out for a square ball infringement.

McAliskey’s free restored the three-point cushion, but the visitors were growing in confidence, with Tom Lee and Danny Neville getting their hands on plenty of ball around midfield.

They narrowed the gap to a single point, with Ian Ryan and corner back Robert Browne, from a free, hitting the target.

Ronan O’Neill and Tiernan McCann sent tidy efforts sailing between the posts, and McAliskey clipped over another couple of frees.

Limerick went 23 minutes without a score, but Hegarty did come close to pulling back a goal when his punched effort came back off a post.

Ryan and substitute Kevin Moore converted frees, and the margin was still a manageable five points going into the final five minutes.

But then Tyrone turned up the heat, with substitute Bradley using his pace and speed of thought to create and execute scores.

And Tiernan McCann crossed for the excellent Harte to palm home a stoppage time goal to give the final scoreline a somewhat flattering appearance.

Coronavirus: How Europe’s biggest football leagues are responding to crisis 13:52
Dynamo Brest sell fans a dummy as Belarusian league forges on 13:03
Barcelona in crisis as six board members resign in protest 12:44
Cycling: Junior Tour of Ireland is cancelled 12:05
GAA to hold remote special congress to help decide fate of 2020 Championship 09:22
Crossword Get access to over 6,000 interactive crosswords