Tyrone conquer Donegal and Ulster right at the death 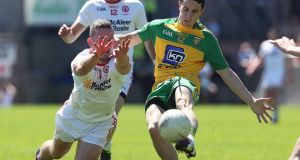 Breathtaking. For seventy-six gruelling, draining minutes in the Monaghan sunshine, the two teams who have been sparring bitterly throughout this decade kept coming at each other, blow for blow, point for point.

It went the way that everyone predicted, draining all time out of the game and all energy out of the full house of 33,433. Donegal, the standard bearers, refused to bow. Tyrone, the challengers, refused to go away.

By the end, you could see belief surging through the Mickey Harte’s team and the announcement of six minutes of injury time was like a death knell to Donegal.

Tyrone trailed by 0-10 to 0-9 at this stage after a monster score from Christy Toye but they made light work of the finish. First, a sublime roll-back the years point from Sean Cavanagh levelled it. Then Peter Harte stopped up to strike a beautiful, nervless point from fifty metres.

After another faltering Donegal attack- they were out on their feet at this stage- Kieran McGeary added the grace note. After five years of anguished waiting and losing, the Anglo-Celt was delivered back into the hands of Mickey Harte in less than five minutes. It was cagey and tough and probably infuriated the traditionalists clinging to the vision of a game that doesn’t exist any more.

But it was a proper, heavyweight championship game between two incredibly proud sides. It was an Ulster epic.

We may have seen the beginning of the end of Donegal’s habitual Ulster final appearance but they came desperately close to adding a fourth title to this remarkable period.

The game had hardly reached the end of its first period when it became clear to those present that they were watching one of the great virtuoso performances given in Clones in any July. Ryan McHugh was breathtaking here, kicking three sumptuous points from distance through a thicket of Tyrone men. His elusive, quick-slow running with the ball bamboozled Mickey Harte’s defensive strategy and he twice forced frees which were converted. Worse, he was absorbing all the energies of Tyrone’s own creative attacking engine, Peter Harte.

Donegal’s strategy was clear here. They matched up on Tyrone’s strike runners and dropped back around the thirty, inviting the Red Hand to strike from distance. The result was nine first half wides, including a 50 from goalkeeper Niall Morgan.

Tyrone opted not to have Justin McMahon renewing his close-up-and-personal marking of Michael Murphy, deploying Cathal McCarron instead. It worked within reason and Donegal failed to locate Murphy with ball when he did post on the edge of the square. But they had the ball skill and accuracy to make the most of whatever space Tyrone conceded.

As the sun beat down and the game settled into a rhythm, the frustration began to tell. Matthew Donnelly was black carded for a challenge which drew blood on Ryan McHugh and then Cathal McShane followed suite for a petulant reaction.

A toying, patient Donegal build-up put Karl Lacey through for the kind of scoring opportunity that has been bread and butter for the Four Masters man but his shot fell short. It would have put Donegal four points clear and left Tyrone hanging on. As it was, they trailed 0-7 to 0-4 at the break and retired for the cool of the dressing room with plenty to talk about.

It must have been a classic Mickey Harte talk. They owned the second half, rattling off four points on the trot and forcing the Donegal attack backwards, retaining their discipline and waiting to pounce.

Sean Cavanagh’s influence was immense and Rory Brennan made a huge impact after his introduction. The managed to cancel out Michael Murphy’s influence from open play and deserved their title as they became what they are now: the champions of Ulster.