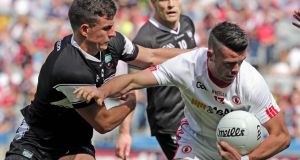 Darren McCurry tries to shrug off the attentions of Sligo’s Niall Murphy as Tyrone booked their place in the quarter-finals of the All-Ireland championship. Photograph: Morgan Treacy/Inpho

“It’s the place to be,” says Mickey Harte, after guiding Tyrone to an All-Ireland football quarter-final for the 10th time in 13 seasons. Even if nothing is won yet, that’s consistent killing when it comes to the big hunt.

Next up are Monaghan in Croke Park on Saturday, a repeat of the 2013 quarter-final. Monaghan were Ulster champions then as well, and Tyrone beat them. So what’s Harte’s secret?

“It’s difficult to say,” he says, with serenity. Not all of Tyrone’s quarter-finals have come through the back door, but their last two All-Ireland titles did (in 2005 and 2008), and clearly that route is serving them well so far in 2015.

“I suppose it does take a bit of the heat off. We find we do a bit better when we get away from the teams in our province, and we missed all the Ulster teams in the qualifiers this year.

“So when we have got out to new pastures, we seem to be able to relax. That’s what happened again this year. The journey through Ulster is a very difficult one, as Donegal found out after four games. We would love to have been doing what they were doing, getting to an Ulster final. But we were sent on a different trail.”

They may not be showing All-Ireland-winning potential but Tyrone had more than enough for Sligo, especially with their spread of scorers: nine players contributed here, Darren McCurry notching 0-8, four from play, with Sean Cavanagh and Mattie Donnelly hitting three each all from play. 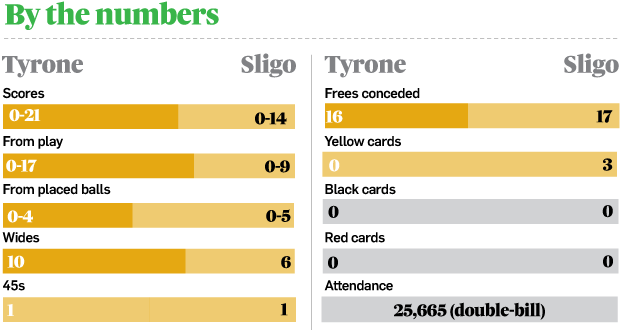 Monaghan, naturally, are an entirely different proposition, and Harte makes no secret of the fact Tyrone will need to improve. “I would hope there is more to come because that won’t be enough to win any serious stuff. We are doing some things very well and other things not quite as well. Some of our decision-making is just off at vital moments.

“But there is a good energy about the team. We probably need to be more clinical in our finishing and people will notice that we didn’t get the goals here that we ought to have got. Goals are very important at this stage of the campaign.”

Tyrone had two near-open goal chances late on, only for Ross Donavan to get himself in the way.

Still, Tyrone were never truly pressed. Sligo trailed by double scores at half-time (0-12 to 0-6) and while Mark Breheny did his best to keep Sligo in touch, the seven-point margin still felt underwhelming.

That perhaps indicates Tyrone still lack the ruthless streak of yore, although Harte reckons that in terms of energy and confidence things are getting better. “We would feel as confident as anybody going into the last eight that we can have a shot at going into the last four.”

The seven-day turnaround doesn’t bother Harte either. “I don’t think I would be too concerned about that. The players have had a measured season. They’re coming together at the right time. They don’t look tired, they don’t feel tired. Next week will tell the tale.”

Sligo manager Niall Carew reckons “the boys did themselves justice in terms of redemption” – at least after their Connacht final calamity against Mayo. Yet Carew also reckons certain media outlets need to be more realistic about the potential of counties like Sligo.

“I would have been very disappointed with Newstalk radio, and the way they disregarded Sligo in their chat last Thursday. The disrespect they showed our boys. They’ve no problem with Adrian Marren coming on and doing interviews or myself, and then they just said everyone knows Sligo are going to be hammered so we won’t bother.

“Sligo has a population of 60,000 people. Now, if younger players hear that, it’s very disrespectful. It’s alright for the older fellas. We don’t mind. It’s just bad taste. And they need to stop being smart. The media other than that have been very good to us, the local media especially.”

Tyrone, meanwhile, push on too, still the only team to win the All-Ireland through the back door as beaten provincial finalists. As long as that door remains open, anything is possible.

1 Born to ride, born to win: Sam Bennett, the making of a green machine
2 Tottenham offer out of favour Dele Alli to PSG
3 Next stop the Champs-Elysées in green for Sam Bennett
4 Keith Duggan: Surreal story of John Delaney needs to act as a wake-up call for FAI
5 Ulster’s European dream clinically crushed by Toulouse
Real news has value SUBSCRIBE

Kiladangan end Loughmore/Castleiney’s double dream 17:22
Here is your handy guide to sport on television this week 17:01
Aaron Connolly rounds off a fine afternoon for Brighton 16:35
Tottenham offer out of favour Dele Alli to PSG 16:27
Wolves to sign Nélson Semedo to replace Matt Doherty 15:43
Crossword Get access to over 6,000 interactive crosswords