Tyrone can secure hard-fought passage across the final frontier

Monaghan evolved over Super 8s into formidable opponents, but it may not be enough 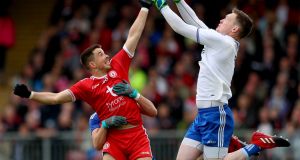 Tyrone’s Ronan O’Neill with Ryan Wylie and goalkeeper Rory Beggan of Monaghan in the Ulster SFC quarter-final at Healy Park in May. Photograph: James Crombie/Inpho

In 2013 and 2015 Monaghan won what for the county were prized Ulster titles, but arrived in Croke Park on both occasions to find Tyrone waiting, with all the history that their cross-border relationship entailed, and in each of the quarter-finals they lost.

This weekend they have qualified for a first All-Ireland semi-final since 1988 – when they were trimmed by Cork – only to learn that they would be joined by their neighbours.

It’s a positive commentary on their attitude this year that it doesn’t seem to faze them even though they have enough baggage from the fixture to require check-in.

Much of the reason for this comparatively Zen state is that they have had a terrific set of quarter-finals: unbeaten, with the best scoring difference and tightest defence and topping a group containing two provincial champions, including Kerry, who they effectively eliminated.

The defensive system that has been the foundation of their achievements is well-oiled and welcoming as a mousetrap, and they are also getting good individual performances all around the field. For good measure Ryan McAnespie stepped up to do a scoring turn against Galway, enabling his team-mates to engage in a bit of finger-pointing at media pundits afterwards for the allegation that they’re a one-man band up front.

Maybe not, but Conor McManus is in all Footballer of the Year conversations, and he and Rory Beggan give Monaghan a conspicuous advantage in the crucial matter of free-taking given Tyrone’s difficulties in the area; although Lee Brennan – who will surely play a more extended role than impact sub – can help to alleviate the problem.

If Monaghan really took to the Super 8s with the league format and provincial venues, Tyrone have evolved a formidable challenge through the qualifiers – from an unpromising starting point of being lucky to beat Meath in Navan – and their pace and cohesion is causing such attrition for opponents that they are getting mauled in the last 10 minutes; even Dublin were beaten 0-6 to 0-3 at the end of their win in Omagh.

Mickey Harte will know that this semi-final poses a stark threat to his hopes of reaching a first All-Ireland in a decade. Unlike a relatively callow Donegal side, Monaghan will scrap all the way through the match. If the match is in the balance going into the last 10 minutes, it’s well to remember that Monaghan are the only side to have got the better of Tyrone in a championship end-game this summer.

That Ulster quarter-final win underlined the danger of McManus, who was well contained up until the hour before leading the late charge – and also goalkeeper Beggan’s long-range free-taking.

Tyrone’s improvement this year is largely down to greater experience, as the personnel hasn’t changed enormously since last year’s chastening experience at the hands of Dublin. The team is playing with more confidence and freedom and, although the stiffest tests are to come, they will face them in upbeat mood.

It’s not that they are problem-free. Conor Meyler’s injury takes an important cog out of the wheel, defensively, and it has been noticeable in recent matches that the much-heralded plan B of Richie Donnelly on the edge of the square has lapsed into disuse.

It might have been a varied option for the team to have a target full forward, but they tend not to play that type of delivery – early and long – instinctively, preferring to move in packs at pace into the opposition danger area.

More troubling is the lack of impact in general in the forwards. Donnelly, Niall Sludden and Connor McAliskey were all replaced in Ballybofey, none of them having scored from play, whereas their replacements managed 2-3 from play. The much-referenced bench options therefore have to be seen in the context of a starting attack that wasn’t exactly prolific.

All of which makes Lee Brennan a likely addition to the starting 15 after his wit and invention were so important to the late blitzing of Donegal.

With both teams running from deep (look at the damage wrought by Karl O’Connell and Vinny Corey in Salthill) there are going to be collisions in the middle of the field, and Monaghan have the strength and doggedness to more than hold their own.

Their path to victory has to combine a restriction of the opponents with the accumulation of a plausible winning total – 1-18 won the Ulster quarter-final in May.

You could see Monaghan putting that up but in Croke Park’s wide-open spaces, preventing a younger Tyrone from simply scoring more may be the issue.

1 Monica Seles: The warrior queen who could have been the best ever
2 Martina Navratilova: A leader in her time, and for ours
3 Séamus Power rockets into share of clubhouse lead in Detroit
4 Red Bull poised to protest over Mercedes’ new steering system
5 GAA will take action against intercounty teams returning to training early
Real news has value SUBSCRIBE