Tipperary full value for another upset as Laois lose thriller 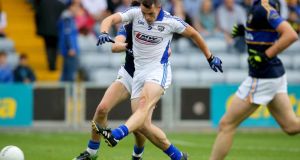 Thunderous stuff in Portlaoise, where Tipperary came through an incredible game against Laois with five points to spare. A game with seven goals, three black cards – all for Laois – and countless sweetly taken points from both sides. For the second weekend in a row, Tipperary upset the odds and were full value for their win.

It’s hard to imagine there’ll be a better game all year. Laois started out abysmally but clawed their way back in the second half. They were torn to pieces in the first half by a Tipperary team that constructed scores with patience and style, one that kicked 2-10 in that first half alone, all of it from play.

Tipp could also have had at least two, if not three more goals at the break. As it was, Conor Sweeney’s double sent them in with a 10-point lead, 2-10 to 1-3.

But then Laois started the second half by scoring quick two goals of their own through James Finn and Conor Meredith. They pressed Tipp high up the pitch and didn’t let them out. The free count started to swing decisively in their favour, with Donie Kingston taking full advantage. Substitute David Conway got another goal and followed it up with a point to level the game with nine minutes left on the clock.

Tipp dug deep, however, and late frees from Barry Grogan and Sweeney inched them into the lead. Grogan sealed the win with a goal on the stroke of 70 minutes.

1 ‘Magnificent’ Conor Connelly remembered after sudden death
2 Favourite sporting moment? It’s a bit like choosing your favourite child . . .
3 Karen Robinson Walton: I am looking at him. I say ‘Benjamin, what have we done?’
4 My favourite sporting moment: When Zidane glided through Brazil in 2006
5 Angling Notes: Many fisheries have closed for the foreseeable future
Real news has value SUBSCRIBE

Favourite sporting moment? It’s a bit like choosing your favourite child . . . 01:00
My favourite sporting moment: When Zidane glided through Brazil in 2006 01:00
Angling Notes: Many fisheries have closed for the foreseeable future 00:00
Man City’s Gundogan says Liverpool deserve title if season cancelled 20:32
England and Wales Cricket Board to announce financial aid package for game 19:36
Crossword Get access to over 6,000 interactive crosswords