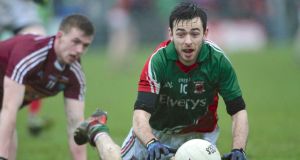 Despite producing a very spirited second quarter display, Westmeath moved ever nearer the Division One trapdoor when they lost by five points to Mayo in front of 6,600 spectators in dreary conditions in Mullingar yesterday.

Mayo’s second win of the campaign seemed in no doubt whatsoever early in the contest. Indeed, the Connacht men looked like they were in for the easiest of afternoons when they led 2-4 to 0-1 after just nine minutes.

The goals came from Lee Keegan in the third minute (after a quickly taken free from Mikie Sweeney) and six minutes later when Sweeney rifled the ball home with the home defence at sixes and sevens.

However, Paul Bealin’s charges began to settle and Kieran Martin fisted the ball to the net in the 11th minute. Fine freetaking from John Heslin kept them in touch, and when Dessie Dolan set up his cousin James in the 32nd minute to score Westmeath’s second goal, remarkably the sides were level (2-7 apiece).

Men in maroon
A point from the energetic Kieran Martin put the men in maroon and white in front at the break (2-8 to 2-7), a lead which looked most unlikely 20 minutes earlier.

Heslin doubled Westmeath’s advantage with another fine free within two minutes of the restart, but that was good as it got for the midlanders.

Conversely, James Horan’s troops took over in most sectors of the pitch and the points flowed freely from open play, while Alan Freeman converted a range of frees.

Indeed, the manager was able to bring on some high-profile substitutes as the second half progressed.

Scoresheet
Three replacements got on the scoresheet – Brian Gallagher (two fine late efforts from play), David Drake (following a 45 in the 49th minute) and Cillian O’Connor (a delightful free in the 62nd minute).

Westmeath (who remain pointless after four games) had also conceded two early goals a week earlier in Derry and their second-quarter heroics yesterday (when they played some outstanding football) had clearly taken their toll. However, their efforts were rewarded when the outstanding James Dolan pounced for his second goal in the 70th minute after Heslin’s initial shot was blocked.

Brian Gallagher’s second point rounded off match scoring, leaving Mayo comfortable winners, but they are unlikely to meet such a generous defence at the start of their remaining three games.