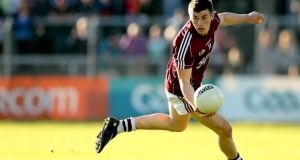 The gorgeous piece of skill from Shane Walsh for his first-half point spread like wildfire on social media. Photograph: James Crombie/Inpho

Tullamore will live forever in my mind as the place where I stole a prized piece of confectionery from the grasp of Brian Cowen. In May 2011, I was reporting on the Leinster championship first round game between Offaly and Wexford in Tullamore. At half-time I went for a restorative cuppa, only to get to the press box refreshments stand at almost exactly the same time as our famed former Taoiseach.

He looked at me. I looked at him. He looked at the last slice of chocolate swiss roll. I transported the delicacy from the plate to my mouth with all the speed and deadly intent of a jungle tiger. He may have been a recently deposed leader of our democracy, but as anyone will tell you, the queue for the cake stand in a GAA press box is no democracy. Offaly’s most famous political export seemed to intuit this, and he bore me no ill-will.

I could almost taste my ill-gotten bounty when I walked through the gates of Tullamore on Saturday evening for the football qualifiers double-bill. As a Galway fan, I travelled in moderate levels of expectation that for all of Tipperary’s recent good form in the qualifiers, we might have enough up front to do the business, and that’s how it panned out – although not without a few scares along the way.

The manner of the last quarter Galway goal giveaway does not fill one with hope ahead of facing James O’Donoghue and company on Sunday in Croker. Retreating to one’s own 21-yard line and defending from there isn’t a great plan to begin with, but the idea would be that, having set up that cordon, you would then at least make your presence felt. Galway had two options – to tackle, or to foul. They did neither, and nearly got embarrassed.

Notwithstanding that, the four goals scored at the other end provided Galway with a lead that they were never going to relinquish, and the option-taking by our inside forwards was so much better than it had been in the Connacht final. Michael Martin is known as one of the deadliest finishers in Galway club football, but he had a hand in three of the four goals, while Danny Cummins cut down on the wides, and continues to win an ocean of ball – if he took the right option more often, he would be a real asset to this Galway team.

My Second Captains compatriot – and bulwark of the Irish Times sports section – Ken Early, once described Neymar as the first YouTube footballer. Could Shane Walsh be something similar in the GAA universe? Having watched that gorgeous piece of skill for his first-half point – killing the ball dead with his right foot from a mis-hit Paul Conroy 45, before turning and lashing it over the bar with his left – in the flesh, I only hoped that the TV cameras would do it justice.

The cameras captured it perfectly, but its real home was not on television at all, but on social media. The point was executed in the exact amount of time it takes to make the perfect ‘vine’, and so it got passed around social media in seconds. Walsh has the potential to be more than just a collection of great moments as a footballer, and Galway will hope to see some more sustained excellence from him.

He first came to national prominence playing in a Hogan Cup final in Croke Park for St Jarlath’s College in Tuam, in 2011. Jarlath’s lost by a point that day, but Walsh took frees off the ground with his left foot and his right foot, scored soaring points from play, and moved with the easy grace of a Maurice Fitzgerald or a Michael Donnellan. He still has a propensity to take too much out of the ball, but his running is getting more direct, and he appears to be improving every day, which is obviously very encouraging looking ahead to Croke Park.

And that’s where Galway are headed. It can be a crude enough way of judging your county’s performance in any given summer, but a day out in Croker is enough to sate most appetites. For me, that means a family invasion of my aunt Mary’s house in Phibsboro, where the talk inevitably turns to tickets – who needs to meet whom for collection, who’s sitting where, and the relative merits and drawbacks of the Hogan and the Cusack (in both their current and now-demolished iterations – last summer’s trip to Croker for the Round 4 qualifier against Cork was preceded by a heated debate over who had the best ticket for the ill-fated football final of 1983, for God’s sake).

There are only 12 games left in the hurling and football championships of 2014, all of which are going to be in Croker, so if you’re currently planning an assault on Jones Road, you’ll have earned your day out. And if I happen to meet ol’ Biffo in the queue for hot dogs on Sunday, he can consider himself forewarned.

1 Gerry Thornley: South African sides would be a welcome addition to Pro14
2 Stuart Lancaster and Leinster ready to roll again at the RDS
3 Liverpool maintain perfect start with win over Arsenal
4 Positive omens for Kenny ahead of Ireland’s Slovakia clash
5 The Offload: Springbok heavyweights heading for Pro14
Real news has value SUBSCRIBE

Liverpool make it three from three; South Africans to be a welcome addition to Pro14 07:42
Ballymun’s Dublin title one to savour for James McCarthy 06:00
Stuart Lancaster and Leinster ready to roll again at the RDS 06:00
Sporting Upsets: When Katie Taylor was stunned in Astana 06:00
Gerry Thornley: South African sides would be a welcome addition to Pro14 06:00
Crossword Get access to over 6,000 interactive crosswords