Second-string Derry side routed by Mayo 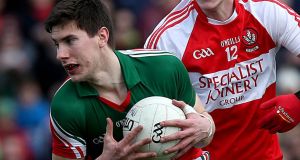 Derry’s decision to send what was effectively a B team to MacHale Park, Castlebar, meant Mayo’s place in the semi-final of the league was as good as guaranteed even before a ball was kicked.

As it turns out, the sides will meet again in Sunday’s semi-final and it may be with the prospect of that that game in mind that Derry manager Brian McIver was showing nothing of his hand in a team which had 12 changes from the side which defeated Kildare last week.

By half-time James Horan’s men had sealed their qualification place as they led by 0-8 to 0-1. And that was playing into a strong wind with the Derry attack failing to register a score for the opening 35 minutes, with eight wides in the half.

Their only score of the half came from wing-back Aidan McAlynn on 20 minutes and by then Mayo had registered five points and could have had a goal or two.

Mikey Sweeney had Mayo off the mark and also finished the half with their eight points as in between Adrian Freeman scored four, including two frees, while substitute Darren Coen, who came in for the injured Cillian O’Connor, and Parson both hit the target.


Superb strike
The game seemed to be over as early as three minutes into the second half when Freeman fired home from the penalty-spot after being dragged down. But the spark the game needed came from Derry’s Emmet McGuckin, now operating at full forward, when he found the net with a superb individual goal on 45 minutes.

Moreover, when substitute Emmett Bradley and Charlie Kielt followed up with points, it was suddenly a three-point game and Mayo had some concern over their scoring average.

However, any lingering fears of Mayo taking that fourth position on the table soon disappeared when Freeman fired home his second goal to finally put this game to bed before a crowd of over 10,000.

Late points from Any Moran and Freeman tidied up what was a very messy game for James Horan who is likely to face a different Derry team on Sunday.