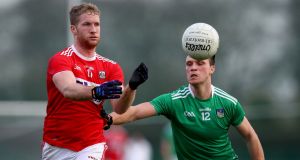 It’s taken them five matches, but Cork finally have their first win of this year’s Division 2 campaign, beating Tipperary in Thurles to give them some hope of avoiding the drop.

A sparsely-attended Saturday evening fixture in Semple Stadium – 1,179 turned out to watch – was sparsely-populated by quality early on, neither team sparking much life into proceedings in the first half and trading points on a fairly even basis.

Cork were under most pressure at the outset, with just one point from four matches, but Tipp also needed a result having only won their home game against Donegal and drawn their match with Fermanagh.

Brian Fox was a late confirmation for Tipperary, having had a red card overturned, and his presence was a welcome one as he roved from the sweeper’s position into the middle and attack at will.

His point in the 26th minute tied the scores at 0-4 each but a free by Luke Connolly and then the score of the half, a well-drilled effort from distance by Eoghan McSweeney, and a follow-up by the ever-dangerous Paul Kerrigan gave Cork some breathing space.

They led by 0-7 to 0-4 at the break but faced the stiff Thurles breeze thereafter, and emphasised their possession game even more, at one stage retaining the ball for more than two minutes through lateral passing and back-passing, before losing it when it went up front.

However, they managed four points on the trot to stretch their lead to seven and looked to be in the comfort zone before Conor Sweeney knocked over Tipp’s first of the second half in the 48th minute and they got four of the following five scores to keep in touch.

A goal was always likely to be decisive and so it transpired, Seán Powter cleverly finding Ruairí Deane with a chipped free and Deane finishing well to the net in the 66th minute to effectively seal the deal for Cork. They had to survive a couple of late goalmouth charges by Tipp, but survive they did.