Royals take command while Wexford are left kicking themselves again 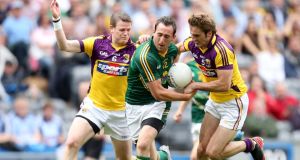 This has all become wearingly familiar for Wexford. For the third year in a row, they slope out of Croke Park scratching their heads at the lost opportunity they’ve left in their wake. This was a game they led for most of the first half – led handsomely indeed as they stretched their legs just short of the break. But when it was there to be killed off, their grip on the knife was butter-fingered. Meath gleefully accepted the reprieve.

It has been that sort of campaign for Meath, one that sees them through to their third Leinster final in four years. Wicklow had them sniffing at the cheese in the mousetrap only for a missed penalty and a fluke goal inside a minute to free them with the bounty.

Here, they trailed by 0-8 to 0-4 coming up to half-time but when Wexford dropped a couple of shots into Paddy O’Rourke’s chest and saw Ben Brosnan hoik two frees badly wide, they panicked. Meath outscored them by 0-14 to 0-5 from there to the end.

When Dublin and Kildare were stuck on one side of the draw, the field was open to any one of four counties to pick their way to the decider. Out of Laois, Wexford, Louth and Meath, you wouldn’t have piled all that many chips on Mick O’Dowd’s young side being the one still standing come July. Yet here they are, staying on for a place long after the rest are strung out like the washing.

“Obviously, for the Leinster final there is a step up required and we’ll review everything and we’ll be ready,” said Mick O’Dowd. “We played a Division Three team the first day, Division Two the second day and now a Division One team the next day. We’ll be ready for it. Wexford have dangerous forwards and overall we’d be happy with the way we handled them.”

Little impression
Not for the first time, those dangerous Wexford forwards found that the questions just didn’t suit them. Red Barry never stopped trying but made very little impression on the game. PJ Banville spent his day getting in skirmishes off the ball before being called ashore with 20 minutes to go. Brosnan seemed to visibly shrink after his two misses.

By contrast, Graham Reilly showed Meath his broad back and invited the rest of his team to hop on. It was he who scored the first Meath point of the fightback, just as it was he who fed Eamonn Wallace to make it 0-8 to 0-6. Time and again, his direct running through the middle scattered the Wexford defence who often felt they had no option but to foul him. On a day when Mickey Newman’s free-taking was just about flawless, it became Meath’s most prized route to goal.

Reilly moves so fluidly in possession that it can look like he isn’t actually covering the ground with any blinding velocity. But he was a constant irritant to Wexford here and he ended the day with four points from play. His first two after the break sandwiched three Newman frees and pushed Meath 0-12 to 0-10 ahead.

They were well on top by this stage, with Conor Gillespie steadily taking hold at midfield. The Wexford defence was second to everything and couldn’t help but give away kickable frees as a result. Of the nine frees Newman kicked in the game, seven came in that second half as the traffic flowed in one direction only.

Ciarán Lyng nearly got Wexford back in the fight with a single punch, stinging O’Rourke’s palms with a shot on the hour. The Meath keeper tipped his effort over the bar however to preserve their lead, 0-13 to 0-12. Within two minutes, it was out to three as Newman and Reilly kicked for home. Stephen Bray added the cherry as the clock ran down.

“In the first half we took bad options,” sighed Aidan O’Brien afterwards. “In second half we dropped balls to the keeper. Paddy O’Rourke saw a lot of the game there because we took wild shots. In a few instances, we gave poor quality ball to front men. You can’t do that.”

And don’t Wexford know it. Another year, another kick in the unmentionables. The qualifiers can’t look overly attractive to them now.