Roscommon send out signal of intent against Mayo 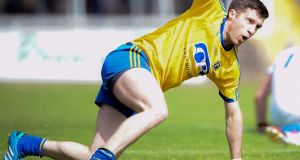 It may have only been the Connacht League, a competition which has helped managers and players cut their teeth before the start of the national league, but Roscommon were sending out a clear signal to their neighbours with this richly deserved three-point win over Mayo at McHale Park, Castlebar on Sunday.

Clearly the fitter and more determined team, Roscommon nailed four points on the bounce in the second half to virtually close out the game to lead at one stage by five as (0-13 to 0-8) Mayo manager, Stephen Rochford, got the first taste of defeat in his new job.

His fellow Mayo man, Kevin McStay, left Castlebar the happier man having watched his team put in a workmanlike display with the strong physical presence in the forward division of Diarmuid Murtagh, Senan Kilbride, Cathal Cregg and Ciaran Murtagh leaving their mark on a game watched by close on 4,000 supporters in wet conditions

Roscommon were full value for the their 0-6 to 0-4 interval lead, three of those points coming from their top man Cathal Cregg, while Fintan Cregg, Diarmuid Murtagh and Neil Collins ensured all of the Roscommon scores came from play.

Mayo did create one or two goal chances but the final pass usually let them down against a Roscommon defence which was well on top in the opening twenty minutes before Mark Ronaldson and Keith Ruttledge hit the target, Conor Loftus coming in with two frees as both Keith Higgins and Kevin Keane were early Mayo injury casualties.

Points from Jason Gibbons and a Conor Loftus free kept Mayo in the game but Roscommon opened their shoulders with a string of points as they began to open up the Mayo defence and book their place in the final against Galway.

Galway target man Eddie Hoare kicked six points, all from frees, as they advanced to the FBD League final with a comprehensive eight-point win over GMIT at Tuam Stadium.

Substitute Martin Shaughnessy’s late goal put a gloss on the scoreline for the students but they failed to build on their impressive first-half showing when they only trailed by two.

Galway led 0-6 to 0-4 at half-time but they could count themselves lucky after the students dominated the opening half-hour.

Andy Glennon put GMIT into an early lead but Galway hit four in a row with Hoare slotting three of those. But GMIT were resilient and when Damien Brennan slotted a free in the 27th minute it was back to minimum, only for Adrian Varley to give Galway a two-point cushion.