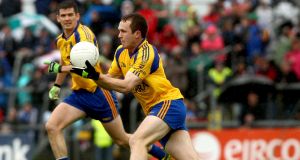 Ward lined out at wing back for the south Dublin outfit in last year’s championship, scoring a point and impressing in the second round defeat at the hands of eventual champions Ballyboden St Enda’s.

Ward also started at wing back for Roscommon in last year’s Connacht championship win over London, at centre back against Sligo, but injury ruled him out of contention for the qualifier win over Cavan and subsequent defeat to Fermanagh.

The 26-year-old had been a major doubt for the surprise defeat to Sligo too, after being hospitalised after intervening in an altercation at Dublin’s Cloverhill Prison, where he worked as a prison officer.

Before departing the north Roscommon club last year Ward had featured in the club’s two senior county final defeats, in 2009 and 2013, but was sorely missed in an underwhelming campaign in 2015.

Among the remaining Kilmacud Crokes county players hailing from outside of Dublin are Longford’s Brian Kavanagh, Cavan’s Eugene Keating and Armagh’s Kevin Dyas.