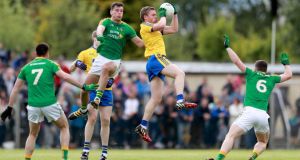 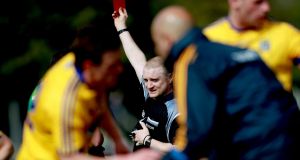 It took Roscommon about half an hour to print the script, opening a clearly unassailable lead and with that writing another chapter in the unbearable lightness of being Leitrim.

The game certainly won’t have sent any tremors into Mayo territory just yet, although Roscommon didn’t need to: there was mention of banana skins lying around Carrick-on-Shannon and instead Roscommon walked all over the paltry challenge presented by Leitrim, winning by more than double scores and reducing their opponents to 12 men in the process.

Leitrim manager Shane Ward actually blamed his team for self-destructing in the second half, seeing two players sent off on straight red cards and another black-carded when all their replacements were used up. It all makes for something of a new low for Ireland’s least populated county, who have now gone five years since beating anyone in Connacht other than New York.

It wasn’t an entirely useless exercise for Roscommon: they certainly cleared their mind of the near nightmare in New York earlier this month, and with 10 different scorers – including a man-of-the-match display from season debutant Fintan Cregg – they showed some flashes of brilliance.

They offered potential for improvement too ahead of their Connacht football semi-final on June 12th, a rematch against Sligo who surprisingly took them out at the same stage last year. They still look a little weak around midfield, and they missed some sitters of frees too which they can’t expect to get away with against weightier opposition.

Conor Devaney, not long back from injury, scored their goal on 27 minutes after a menacing approach, started by Cregg, with Ciaran Murtagh providing the final pass. That put Roscommon 1-6 to 0-4 in front, and when they promptly added five more points without reply, Leitrim were cut hopelessly adrift.

They’d lost their captain and centre back Gary Reynolds to a black card just before half-time, a little harshly perhaps. Although there was no excuse for losing substitutes Darren Sweeney and Killian McGrilish to straight red cards in the last 15 minutes, while Adrian Croal was also black-carded five minutes from the end, at which point Leitrim had used up all their replacements. 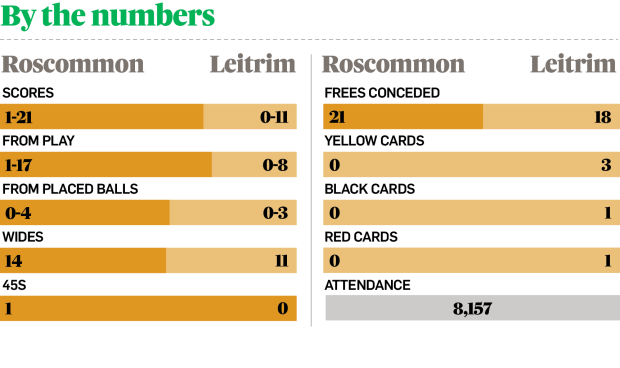 “I suppose the scoreboard flatters us a little, especially with them having the men sent off,” admitted Roscommon joint manager Fergal O’Donnell. “And we were patchy. There was no 75 per cent, it was either 50 per cent, or 100 per cent, you know what I mean? We looked average at times, but it gives us plenty to work on, and if you told me before we’d score 1-21 I’d be happy with that.

“The players off the bench made a difference, and we’ve a few players to come back too, but we know Sligo are waiting for us. There’s a lot of talk about Connacht finals but we’re entirely focused on that game. We see it as a 50-50 game. There was still some worry and disappointment after New York, but it was far from the perfect performance here, which is a good way to be going in against Sligo. Once we didn’t concede a goal we felt we were comfortable enough here.”

Leitrim are never afraid to feign optimism, although whatever level of that was spread around the crowd of 8,157 soon disappeared. They’d started promising enough, Donal Wrynn scoring their opening point after a minute, but they didn’t score again for another 15 minutes – that scored by the courageous Kevin Conlan, easily their best player on the day. He finished with three points from play

Emlyn Mulligan was stymied on a few levels, carefully marked by Roscommon and also lacking some sharpness after taking last year out of the game. Their fitness and commitment couldn’t be questioned, although their manager himself questioned why they ended up with 12 men on the field.

“Yeah, discipline is key to performance,” said Ward, “so it was disappointing that didn’t hold out. But I sometimes think it’s an easier call for the bigger teams than the smaller teams (not to send players off), because it’s less controversial, for the referee. And I’d hope division four teams might get better respect from the referee, to step out and make some big calls.”

Indeed Ward suggested Mulligan took a punch in the face in the first half that wasn’t picked up: “(He) came in for some very harsh treatment in the first half, and there were no black or yellow cards shown. That’s the run of the game.”

Roscommon’s full-forward line of Diarmuid Murtagh, Cathal Cregg and Donie Shine scored 0-7 between them, all but one from play, and together they created several goal chances, Shine forcing one excellent save from Leitrim goalkeeper Brendan Flynn.

So as the game progressed it was clear Leitrim were once again destined for that old familiar qualifier road: “Yeah, but we’re a resilient bunch,” suggested Ward. “My job is to try to change that situation where we don’ just lose the first round of the championship and then head into the qualifiers, and we’re trying out damndest to change it. There are some positives.”

It’s hard to single those out although such is the unbearable lightness of being Leitrim it’s unfair to be overly negative, too.