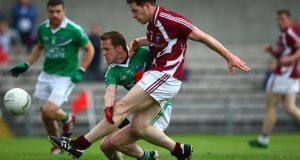 An injury-time point from right full back John Woods earned Fermanagh a deserved place in the second round of the All-Ireland senior football qualifiers, edging out pre-match favourites Westmeath by the narrowest of margins in Mullingar on Saturday afternoon.

The Ernesiders looked set to pay for their profligacy – they had shot an astonishing 20 wides to their hosts’ eight in the 70 minutes which preceded – with extra-time beckoning until Woods came forward and coolly slotted over the winner.

There was very little between the sides until Conor Quigley scored a fortuitous goal from nearly 50 metres in the 13th minute.

Some 12 minutes later, Peter Canavan’s men led by two points (1-4 to 0-5) when Kieran Martin’s free came back off the post and a Fermanagh counterattack yielded a well-taken goal from left corner back Damian Kelly, a clear indicator of the ease with which the winners could open up the opposition defence.

At the break, wind-assisted Fermanagh led by 2-5 to 0-7, but the gap should have been much bigger after a wide count of 12-2 in the winners’ “favour”.

Westmeath took the lead (1-10 to 2-6) for the first time since the opening minute of the contest in the 46th minute when their leading scorer John Heslin slotted the ball to the net from a penalty after Chris Snow had upended Denis Glennon. However, within three minutes, the outstanding Ryan Jones responded with a terrific solo goal.

With seven minutes of normal time remaining and Westmeath two points in arrears, Kieran Martin was dismissed after picking up a second yellow card, but his team-mates rallied with a brace of points from Callum McCormack, the first of which should certainly have been a goal from point-blank range. Extra-time looked likely until Woods popped up to secure a memorable victory.