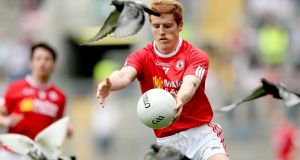 Peter Harte has been top scorer for Tyrone in four out of the last five football championship seasons, and has scored 3-7 so this year. Photograph: James Crosbie/Inpho.

You look at Peter Harte and you see bones. Elbows and shoulders, pointed and raw. At first glance, he looks like he was borrowed from the 1980s, the sort of Tyrone footballer who’d spend a day covered in grease underneath a car bonnet before wiping his hands on his boiler suit to go training. Like somebody took the ghost of John Lynch and thatched him with a red roof.

Something about the look of him doesn’t chime with 2016. He’s an athlete but not in the way, say, Diarmuid Connolly is an athlete. He has an ascetic bearing, a sparseness to him that says no materials were wasted during the build. Yet in Tyrone, they would say that nobody is tougher, nobody is more willing or more likely to be in harm’s way.

“He takes an awful lot of heat,” says clubmate Enda McGinley. “He gets a lot of close attention in club matches, as you can imagine, and obviously with Tyrone too. His regular game is one of a very physical nature where he drives hard into tackles and he carries into contact. I would be looking on sometimes and wishing he wouldn’t, not because he’s going to get dispossessed but more because of the punishment he takes on with it.”

He flits around the pitch like middle management dropping in on various sub-groups during a weekend retreat. A fix here, a solution there. Whatever the problem, send for Petey. He’ll know what to do.

In the Ulster semi-final of 2011, Donegal were coming in the door as Tyrone were going out. Jim McGuinness spent the run up to the game breaking the Tyrone players down for his side, stripping them of the aura that comes with three All-Irelands and four Ulster titles in the previous seven years. Special attention was paid to those few youngsters in the side who had no aura to speak of.

“I spoke and harassed young Peter Harte all day,” wrote Donegal’s Kevin Cassidy in his Gaelic Life column years later. “I was told before the game that I could get into his head and put him off his frees. At that time, it was felt within our squad that we were too nice and that perhaps this was one of the reasons we failed to have any major impact when it came to winning silverware so I think the verbal abuse I gave that day stemmed from that.

“Every time Peter hit a free I spoke to him saying things like, ‘Miss this one and uncle Mickey will have no option but to take you off’. Pointing over at the sideline saying, ‘Look, he must be warming up for you’. It did affect him as he missed three scoreable frees that he would normally nail.”

It worked that day. That was the last day it worked. Harte went out in his next game a fortnight later and kicked seven points against Longford, six of them from play. He torched Armagh the following week and didn’t miss a kick against Roscommon in the last 12. Tyrone fell to Dublin in the quarter-final but he wasn’t any more diminished than his elders in the squad. The past was theirs, the future was his.

“He is massively driven,” says McGinley. “He has an anger inside of him that is purely competitive in nature. He’s a very quiet, very unassuming and a very quietly-spoken lad when out and about. But in a competitive scenario, he is fearsome. There’s no back doors with him – he’s very up front. He’ll question boys, he’ll challenge boys to perform better.

“It’s that juxtaposition between his personality and his drive that makes him interesting. I wouldn’t never want to label someone this way and it’s something I don’t do lightly but I see some of Cormac McAnallen in him. Cormac had something quite similar about him.

“Quietly spoken and yet hugely present in a dressing room and someone who had a power and his own determination that is obvious to everyone.

In his career, Harte has been blessed in everything but the timing of it. Players with less drive, talent and dedication were born a decade earlier and have three All-Irelands to their name. Harte was marked out from a long way back as one of the wave who would come along and carry Tyrone after McGinley’s generation got on with their lives. Problem was, there was only one of him.

Even Mattie Donnelly wasn’t Mattie Donnelly straight away and took it upon himself to turn down his first call-up to the panel so he could bulk himself up to be ready. Harte threw himself into the mix from the outset and, by the following year, uncle Mickey was building the team around him. Tyrone named him at six for most of the league but the number only hinted at the role. Already, he was too important to be given just one job.

“He generally went to where he was needed,” says McGinley. “As teams tried to put the clampers on him, you toyed with the idea of putting him in at full-forward every now and then for a while. I’d have always felt it was worth trying to get him into a one-on-one situation because he is so strong at winning the ball and he has the feet for it and the head for it.

“Sometimes you’ll see him maybe make a bombing run forward and linger up there for a while after the move breaks down. I like seeing that because sometimes I just think he’s that good, he should be given a free role. You’d be tempted to say to him, ‘Look Petey, do whatever you want to do and go where you want to go’.

“But funny enough, I actually don’t think he would like that himself. They tried it a few times before, maybe three or four years ago and I think he preferred ultimately to be given a more structured role to carry out. His thinking would be, ‘Look, give me a job and I will do that job’. What you get from him in that scenario is the job you want done, done better than anyone else could do it. But also, once he is happy he has taken care of it, then he will add something extra.”

Bit by bit and year by year, Tyrone have been able to lighten his load. Niall Morgan arrived in 2012 to knock over the 45s, Connor McAlliskey and Darren McCurry came along to kick frees and, on occasion, their share of points. In four out of the last five seasons, he’s been Tyrone’s leading championship goalscorer either jointly or on his own – and remains so even if you strip out goals from penalties. This despite almost never spending more than the occasional snatched five minutes sited in the full-forward line.

As much as anything, that’s what his majestic point in the 75th minute of the Ulster final was about. For a quiet guy to take such a flamboyant score, the context needs to be right. Earlier in the game, earlier in the season even, Peter Harte might not reach for that club.

But watch it again and look at how he realises it’s on even before the ball is recycled to him. And how he takes it on the run, totally bodily committed to the strike so it has the momentum behind it to send it sailing through the posts from 50 metres. Just like Cavanagh had done a minute earlier, it was the right move at the right time.

“Petey isn’t the guy who takes rash shots,” says McGinley. “He’s too clever and too calculated for that. He wouldn’t allow himself to do it. So when he was doing that, it wasn’t a hit and hope.

“He was fully committed to it and knew it was the right thing to do at that moment. He had total confidence in his ability to do it. I was delighted to see it because he is that player.

“I know myself what it’s like when you’re in the middle of it, you’re so guarded against people giving you compliments and you’re so paranoid almost of letting it go to your head. But I do genuinely hope that he is able to enjoy some of it.”

Winning generally helps. After six years of frustration, Harte finally has Tyrone where he needs them.