Paul Mannion continues to move in the right direction 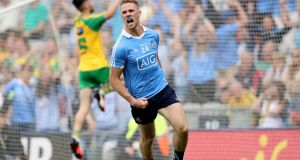 There was a time in Paul Mannion’s life when he was thinking about going away and some people said he’d be mad not to. Then came the time he wanted to go away and they said he was mad to even think about it.

Fortunately for himself - and indeed the Dublin football team - Mannion trusted his own instincts on both counts: as a young teenager, playing soccer with Belvedere and later Home Farm, he thought about going to England, where many of his colleagues had already secured a trial with the prospect of a wealthy professional contract down the road.

Only Mannion wasn’t so sure, didn’t necessarily have the confidence in his own soccer ability, and after securing a place on the Dublin minor team, for 2011, decided to stay where he was. Although Dublin lost that 2011 All-Ireland minor to Tipperary, within two years Mannion had won back-to-back All-Ireland football under-21 titles, while also starting in Dublin’s senior All-Ireland win over Mayo in 2013.

Then, in what must have sounded a little mad even to himself, he decided to move to China, spending the 2014-15 academic year in Beijing and Wuhan as part of his UCD degree in Chinese and International Commerce. He was still only 21, but there was no guarantee he’d get his place back on the Dublin team, especially as he was watched from Hill 16 in September of last year as Dublin beat Kerry in the 2015 All-Ireland final.

The difference is Mannion did have the confidence in his own football ability: this after all is the player who approached Jim Gavin days before Dublin’s All-Ireland final replay against Mayo earlier this month, telling him how good he felt, that he was flying, and that Gavin might want to start him. (Which, of course, Gavin did.)

“No regrets about going away, not at all,” Mannion says, with utter conviction. “I knew when I started in UCD, with the Chinese as part of my degree, that I’d have to spend a year abroad. By the time it came around it was a welcome break and a chance to explore a bit of the world, learn a language, meet different people.

“I didn’t really expect to have played Dublin senior football for two years anyway. And I felt like I’d love a break. There were 12 of us (in the class), and I loved it, the culture, the lifestyle, always something different. And didn’t really miss football an awful lot. I was doing a lot of other things, playing soccer in a college soccer league, playing pool, and table tennis, like mad, every day.”

He could possibly have got back with Dublin towards the end of last season, if he’d tried, but decided instead that having missed so much of 2015 it would un unfair, perhaps unwise, to jump on board so late; instead he rejoined the Dublin panel like everyone else on January 2nd.

“In the first league game in Croke Park, against Kerry, I actually came in at half time and got sick, into the dressing room sink. I was absolutely knackered, and that raised eyebrows a little bit. And it did take a long time to get back up to that level. I always thought it would be difficult and it was, no doubt about that.

“If you take a year out you know there is going to be a risk, the space mightn’t be there when you get back. Jim gave me a chance early in the year, and I was extra determined when I came back, extra motivated. January and February were tough months. But back in this year, I felt a lot more eager, motivated, than I was in January the previous time, so. By the time the summer came around I was probably in the best shape I was ever in.”

The break, in other words, did him no harm at all. He was in and out of Dublin’s starting 15 this summer (coming off the bench to score a crucial goal against Donegal in the quarter-final), but wasn’t named to start in the drawn final against Mayo. Then, days before the replay, he approached the Dublin to let him know his feelings.

“I had an idea, spoke to Jim, and said, ‘I feel ready, I feel I’m flying and if you’re thinking of making any changes I’m confident and up for the challenge’. Then a couple of days before he gave me the nod. So I just initiated it myself. As it came out, I probably didn’t have as good a game, or near as good a game as I thought I was capable of, in the replay. I felt so confident that I probably worked myself up a bit too much really.”

Not that he had a bad game, either, and for Mannion - speaking at the launch of the Elvery’s Intersport nationwide Bring The Colour Campaign - he’s again looking ahead, his club Kilmacud Crokes playing St Jude’s in the quarter-final of the Dublin championship on Wednesday night.

He’s also got the travel out of his system, at least for now: there is the prospect of going back to China to work, but for now he’s committed to a MA in Digital Innovation at Smurfit College, his passport buried away in a bottom drawer.

“Back playing football with Dublin, this year, I said I’d like to do a few more years of this. I’d never tell anyone they should go away or they have to go away, but for me it was a great move.

“With the soccer, a lot of the lads did go away from my age group (to England) and there is only one left over there now, 90 per cent of them have returned, playing in the league of Ireland, don’t have college degrees or anything to fall back on. They are still holding out hopes to get back across, but that just wouldn’t interest me at all.

“If that’s the chance they want to take, I still wish them all the best. I don’t want to be telling soccer (players) how they should run things. But looking back now, the thought of kids just playing football in the hope of getting across the water, I don’t think it helped their development much at all. But that’s another issue altogether.”