Nothing to choose between Mayo and Kerry 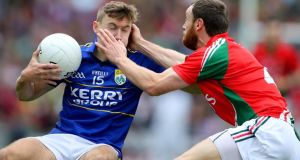 Drama all the way at Croke Park, where Mayo dragged a second half performance from the depths and almost got into the All Ireland final.

Despite having played 37 minutes with 14 men after Lee Keegan was sent off, they forged ahead to lead by four points going into the final four minutes. But a late James O’Donoghue goal and a point from substitute Kieran O’Leary squared matters and though both sides had their chances to win it, the sides ended level.

That either side is still in the championship at all is a small miracle. Mayo didn’t turn up at all in the first half. Everything that was important, Kerry got right from the beginning. When Mayo chose to double mark O’Donoghue with Tom Cunniffe playing as a sweeper, Eamonn Fitzmaurice took only 20 minutes to decide to spring Declan O’Sullivan.

Where Stephen O’Brien had been drifting out around the middle as a spare man, O’Sullivan stayed closer to goal and made Mayo commit a defender to him, loosening up the attention on O’Donoghue and Paul Geaney in the process.

In a game as tight and tactical as this, shooting from distance was always going to be a bellweather. Cillian O’Connor, Aidan O’Shea and Colm Boyle all had poor misses for Mayo in the first half, and for the longest time it looked like that was going to be the crucial difference between the sides. At the other end, David Moran landed two bombs with the outside of his right boot for Kerry and five of their six starting forwards had a point from play to their name by half-time.

In the search for a primary reason why Kerry went in 0-9 to 0-5 ahead at the break, there’s no need to look any further. Mayo kicked five out of 12 scoring chances in the first half, Kerry kicked nine of 13.

O’Connor was carrying the burden of responsibility for most Mayo attacks but in that first half his radar was ever so slightly off. He missed a glorious goal chance after just 10 minutes. A long ball in on top of the Kerry full-back line was tapped into space by Alan Freeman and O’Connor did everything but the one thing he needed to. He rounded Brian Kelly and made space to roll the ball into an empty net but only managed to catch the side netting. Without a goal, Mayo were always going to find the task sizeable against a more accurate Kerry side.

And it became gargantuan two minutes before the break when Keegan was sent off. It was one of those red cards where you could see why it was given but where the outcry would have been minimal had David Coldrick decided to flash yellow instead. Keegan won a free when surrounded by Johnny Buckley and Donnchadh Walsh and in the clinch that followed, he swung a kick at Buckley. It didn’t connect but the intent was enough for Coldrick to decide his day was done.

It meant that they came back out with a four-point deficit to make up and short a body with which to do so. If there was a soul among the 52,495 crowd who thought they would, they were stretching optimism to breaking point. Kerry had been clinical, methodical and ruthless. For Mayo to turn that around was going to take an unlikely turn of events.

And yet, turn it did. After O’Donoghue kicked Kerry into a five-point lead straight after the restart, Mayo finally got going. Alan Dillon kicked a point, O’Connor stroked over a free. Mayo eschewed the high-ball tactic of the first half and started running at Kerry. Colm Boyle landed a huge kick, Dillon followed up with another from way out on the right sideline. By the 46th minute, O’Connor had drawn the sides level at 0-11 apiece.

It was a cracking game now. Andy Moran came off the bench and kept the tide pushing in Mayo’s direction. He beat Marc Ó Sé to his first ball and sent Jason Doherty in for a point.

But Kerry had their moments too. For all that O’Donoghue had been reasonably well minded by Higgins, he was still able to get on enough ball to be effective. One inside pass set Walsh up for a good score and O’Donoghue himself had a massive chance for a goal on 52 minutes when he pounced on a dropped ball to go in on goal. His shot was looking for the roof of the net but it went over the bar instead.

It looked very costly four minutes later when Donal Vaughan was pulled down for a penalty that O’Connor stroked home. And when O’Connor followed up with the next two points, Mayo were improbably five points up with five minutes to go.

Back came Kerry. Peter Crowley fisted a point after a good run along the endline. Moran and Sheehan swapped points before O’Donoghue’s goal arrived to save Kerry. A high ball in from David Moran was fielded by Kieran Donaghy and he fed the championship’s outstanding forward. He doesn’t miss twice.

And when O’Leary wriggled into space to kick the equaliser in the second minute of injury-time, Kerry could breathe again. All square, with a replay in Limerick next Saturday as Croke Park is hosting a college American Football game.