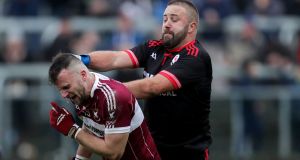 The fairytale continues for St Columba’s, Mullinalaghta after they became the first Longford side to book their place in the Leinster Senior Club final. They did it in style at Pearse Park against an Éire Óg side that finished the game with 12 men.

It has been a remarkable three years for the half parish, who in 2016 won the Longford SFC title for the first time in 66 years. This year they completed a three-in-a-row and on Sunday afternoon created history.

The game was over as a contest when James McGivney scored Mullinalaghta’s first goal in the 44th minute after some good play from Gary Rogers. When Aidan McElligott flicked the ball to the net in the 49th minute it extended the Longford side’s lead to 13 points and they tagged on five more points in the final 10 minutes.

Éire Óg were the better side for the opening 10 minutes but for all their dominance they struggled to get scores on the board with a combination of poor shooting and some terrific defending.

Mullinalaghta goalkeeper Patrick Rogers pulled off a fine save to deny Christopher Blake in the sixth minute and in the 10th minute the Longford side got their opening score through Donie McElligott. Blake replied for Éire Óg but then the game turned in Mullinalaghta’s favour as they took control.

Éire Óg were reduced to 14 men in the 30th minute when Ross Dunphy was shown a straight red for lashing out at Aidan McElligott.

Darragh O’Brien scored the opening point of the second half and Éire Óg’s third and last in the 41st minute as Mullinalaghta upped their performance with Gary Rogers, Rian Brady, Donie McElligott and Shane Mulligan to the fore.

Rian Brady pointed over a neat score in the 42nd minute to stretch the lead to seven and then two minutes later James McGivney found the back of the net. In the 47th minute Christopher Blake was sent off for a second yellow.

And Éire Óg were educed to 12 men in the 50th minute, when after Aidan McElligott goalled for Mullinalaghta goalkeeper Robert Moore struck him .

Mullinalaghta added five late points to their tally to leave 18 between them in the end.